Convicts: The One Exception to the 13th Amendment - FreedomUnited.org
This website uses cookies to improve your experience. We'll assume you're ok with this, but you can opt-out if you wish.Accept Read More
Skip to content
Back to Global News 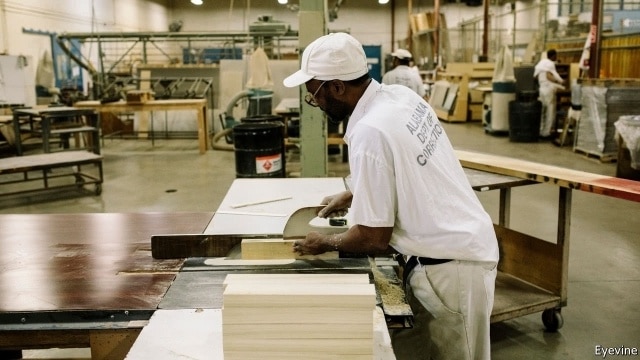 Convicts: The One Exception to the 13th Amendment

The 13th Amendment to the United States Constitution banned slavery and indentured servitude when it was passed in 1865.

But there’s one exception to the law: when slavery is used as a “punishment for a crime.”

Prisons across the country have thus been able to subject prisoners to forced labor to help “balance the books.” Private prisons were allowed to hire inmates in 1979 and last year nearly a third of America’s inmates had to work.

However, much of this work is paid far below federal minimum wage of $7.25 per hour. In fact, the Prison Policy Initiative, an advocacy group, says that some prisons are paid merely 5 cents per hour. Prisoners across Alabama, Arkansas, Florida, Georgia, South Carolina, and Texas receive no wage for daily chore work.

Yet as The Economist explains, exploiting prisoners for free labor has a side effect of undercutting local labor markets as prisons don’t hire people from outside the prison for these jobs.

Michael Poyker of UCLA Anderson has collected data from American prisons and the labour markets in their surrounding counties between 1850 and 1950. Crunching the data, convict labour hit free workers with a double whammy.

The introduction of convict labour in a county in 1870-1886 accounted for 16% slower growth in manufacturing wages in 1880-1900, 20% lower labour-force participation, and a smaller employment share in factories than there would otherwise have been. This is not only because free workers were directly replaced by prisoners.

The remaining firms using local workers then replaced them with machinery to compete with other firms using convicts. Mr Poyker reckons that the use of prison labour resulted in 6% of the growth in patenting new technologies in industries that were affected.

The Economist says that even today forced labor in U.S. prisoners is hurting wage growth, arguing that “Globalisation means that convicts stitching Victoria’s Secret bras compete as much with Chinese workers as with locals.”

Even those items that are required by law to be made in America — such as military uniforms — are affected. Just six years ago, Tennier Industries, an American military-clothing firm, fired 100 workers because it could not compete with rivals employing convicts in prisons.