Prince Harry Speaks Up for Girls during Nepal Visit - FreedomUnited.org
This website uses cookies to improve your experience. We'll assume you're ok with this, but you can opt-out if you wish.Accept Read More
Skip to content
Back to Global News 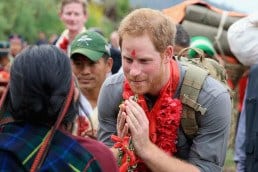 Prince Harry Speaks Up for Girls during Nepal Visit

Prince Harry, on his final night touring Nepal, gave an inspirational speech at the Girl Summit.  “There are way too many obstacles between girls and the opportunities they deserve…”

He continued, “We need to acknowledge that so many countries and cultures are failing to protect the opportunities of young women and girls in the way they do for boys.”

He wholeheartedly embraced the chance to address the challenges of girls and called on others to speak up on their behalf too.  “We won’t unlock these opportunities for young women and girls unless we can change the mindset of every family and community. To achieve this, it cannot just be women who speak up for girls.”

Nepal has one of the highest rates of child marriage in the world. According to global non-profit Girls Not Brides, 41 per cent of Nepalese girls are married before the age of 18. Though that number is high, it has dropped by 10 per cent over the last decade, and government officials hope it will cease entirely by 2030.

Prince Harry says the key is education. “Improved access to education can transform lives, families, communities and ultimately entire countries.” He believes that once girls finish school, they have the skills and confidence to make positive changes in their lives, and in the lives others.

On Wednesday, Prince Harry told the public that he plans to stay in the country of Nepal for nearly another full week in order to do some work on earthquake relief with Team Rubicon U.K.

He also noted that watching the sun rise over the Himalayas was a sight he will forever treasure.