Pakistani Fashion Designer Shines Light on Forced Child Marriage - FreedomUnited.org
This website uses cookies to improve your experience. We'll assume you're ok with this, but you can opt-out if you wish.Accept Read More
Skip to content
Back to Global News 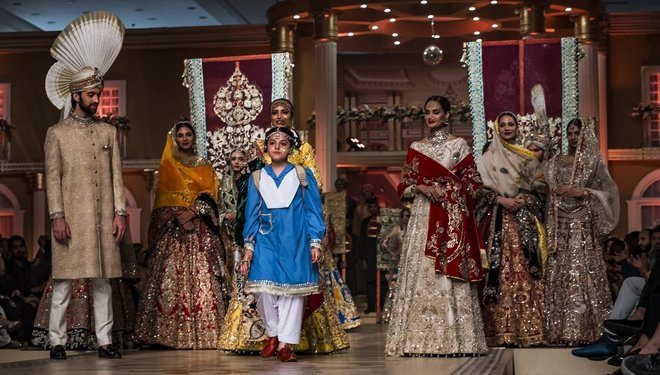 Pakistani fashion designer, Ali Xeeshan, used the closing moment of this year’s Pantene Bridal Couture Week to shine a light on the problem of forced child marriage in the country. A young girl, dressed as a bride came out to walk to ramp to the shock of the audience.

Arab News reports that Xeeshan teamed up with UN Women to stage the event:

Hand in hand with UN Women, Ali’s finale had a young, school-aged girl dressed in a school uniform outfitted with bridal trappings, like borders and embroidery, walk the ramp. Adorned in the traditional jewels that, for generations, have marked one as a bride and with henna-painted hands, the image of this young girl was a shock to the system and went viral on social media.

According to the UN Women’s official press release on the collaboration, Pakistan’s Child Marriage Restraint Act (CMRA) sets the legal age of marriage as 16 for women and 18 for men, but it is still estimated that more than 20 percent of women are married off before the age of 18 and three percent overall do not even cross the age of 15 before they get married.

There have been efforts to increase the legal age of marriage from 16 to 18 for women across the nation, but this has faced criticism and resistance.

UN Women representative Jamshed Kazi noted, “It’s astounding how women aren’t allowed to drive or vote before the age of 18 and at the same time, they’re forced into this lifelong commitment way before they reach that age.”

The UN agency also urged audience members and those on social media to go to www.thebridaluniform.com to learn more about the problem and sign a petition asking Pakistan’s parliament to up the legal age of marriage for women to 18.

There have been efforts to increase the legal age of marriage from 16 to 18 for women across the nation, but this has faced criticism and resistance.

How dare they, this way of living is to the extreme evil of course and extremely rank. These children should live healthy.