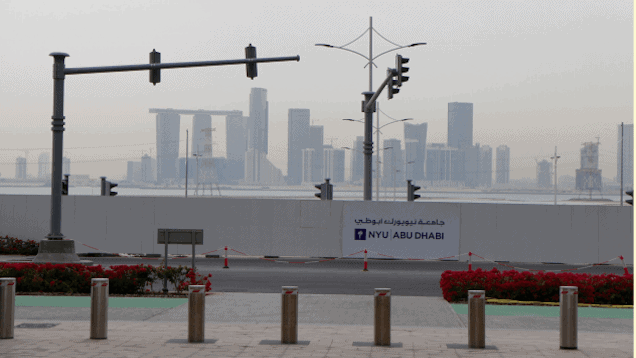 New York University’s campus in Abu Dhabi was built in part by exploited workers. Now a new report from the Coalition for Fair Labor says that the university “continues to run an unacceptable risk of forced labor” and has yet to compensate workers subjected to labor abuses.

“It is a remarkable pattern of mistakes,” said Sahiba Gill, an NYU Law student and main author of the report. “At cost of millions to workers, NYU Abu Dhabi used forced labor in its four years of construction and failed to effectively monitor it for nine years, even in the face of serious reputational risks.”

The report, titled “Forced Labor at NYU: Compliance at the Global University,” was written using compliance reports written by the compliance monitor for NYU Abu Dhabi, the Nardello & Co. report on the campus’ construction, NYU Abu Dhabi’s “supplier code of conduct,” along with public statements, coverage of the campus by the media and NGOs, and books regarding labor laws in the Gulf Cooperation Council (GCC), of which the UAE is a part.

After a number of reports and statements from Human Rights Watch and other organizations, the New York Times reported in 2014 on the harsh, exploitative labor conditions at the campus’ construction site.

Workers had been working long hours under harsh conditions and 10,000 of them did not receive the wages they were due. When the workers went on strike, they were interrogated, beaten up, kicked and hit with shoes, workers told the Times.

NYU has admitted that roughly one-third of the workers were employed by a contractor that violated labor laws and said that it would compensate workers for unpaid wages. Yet, The Coalition for Fair Labor report says NYU has neither paid back lost wages or mitigated the risk of forced labor.

“Our professional, independent labor compliance monitor, Impactt Ltd., has reviewed NYUAD’s labor compliance between December 2015 and March 2018, and ‘identified a good level of compliance among contractors and a high level of satisfaction among workers,” she said.

However, this same Impactt compliance report pointed to several risk areas at NYU Abu Dhabi, including hiring practices, recruitment fees, and that “workers may not be paid what they are due or that they may work excessive hours.”

Gill, the author of the Coalition for Fair Labor report, added that although construction on the campus is complete, employees are still not protected against forced labor.

“Forced labor is invisible. It’s about the ties of debt to recruitment…and it’s about the penalties they can face for leaving work.”

It seems that modern Universities are no longer the respected building blocks of ethical and peer approved research institutions that they once were. By ignoring ethical and best practices themselves, they send the wrong message that it is OK to use slave labor, torture animals needlessly, and disrespect female attendance and their contributions. IT IS NOT OK TO USE ANY KIND OF VIOLENCE, INCLUDING SLAVE LABOR, ANIMAL CRUELTY, AND GENDER DISRESPECT OF ANY KIND.