#JusticeforNoura: Forced into Marriage, Sudanese Girl Faces Death Penalty - FreedomUnited.org
This website uses cookies to improve your experience. We'll assume you're ok with this, but you can opt-out if you wish.Accept Read More
Skip to content
Back to Global News 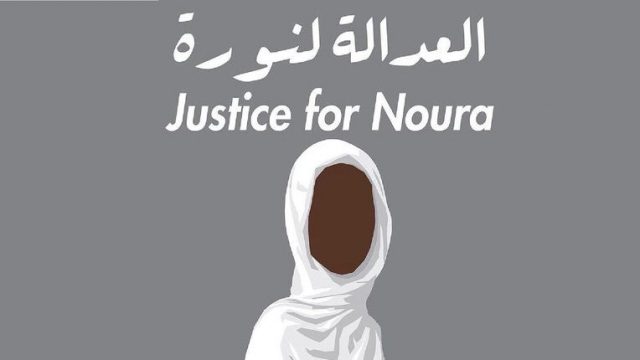 Noura Hussein did not want to marry. At 16, she was still in high school, aspiring to become a teacher. But her family forced her to a marry a man of their choice — a cousin as it turned out — against her will. They made a contract with the groom’s family, but Noura refused, running away to live with a relative for three years.

Yet in April of last year, her father persuaded to Noura to come back home. He promised that the wedding was off.

It was a trap. Her family forced her wed the man and move in with her new husband. When Noura refused to sleep with him, her husband sought the help of his brother of cousins. They held her down as Noura’s new husband raped her.

The following day he tried to rape her again, but this time Noura grabbed a knife and stabbed him to death. In Sudan — where it is legal for husbands to rape their wives — Noura was subsequently convicted of murder and sentenced to death.

Late last month, Hussein was found guilty of premeditated murder. On Thursday, she was sentenced to death by hanging. Her legal team has 15 days to appeal the sentence before she is executed, according to witnesses in the courtroom, who spoke to The Washington Post and documented the hearing on social media.

In Sudan, a girl as young as 10 can be legally married with the permission of a judge and a guardian, Reuters reported.

“Noura Hussein is a victim and the sentence against her is an intolerable act of cruelty,” Seif Magango, Amnesty International’s deputy regional director for East Africa, the Horn and the Great Lakes, wrote in a statement.

Hussein has been held in a women’s prison in Omdurman, Sudan’s second-largest city, since May 2017. After she told her family what happened, Hussein’s father turned her in to police, calling her a “shame” to the family, according to Afrika Youth Movement, an activist group working with Hussein’s lawyers.

International outcry has erupted since her sentencing, with supporters of the teen using the hashtag #JusticeforNoura on social media.

Under sharia in Sudan, forced child marriage and marital rape are not considered crimes, and thus cannot be used in a defense. Furthermore, the family of the deceased can choose whether or not they want a person found guilty of murder to pay a fine or face execution.

The man’s family chose Noura’s execution, and as the judge delivered the sentence his family began “clapping with joy” according to witnesses in the courtroom.

Badreldin Salah, a 25-year-old activist with Afrika Youth Movement, said that many other girls face marital abuse in Sudan but they “don’t raise their voices or say anything because of the social pressure or the social stigma. They prefer to stay silent.” But she says Noura’s case was different.

“Noura stood up,” Salah said. “Noura rebelled on the family and on the social system. She is also one of the many women who refused to submit to this violence and stood up to defend herself.”

UK govt should make it clear that if Noura isn’t immediately released & all charges dropped, we will sanction Sudan Government. Genuine aid to the ordinary people should continue, but all local & national politicians , non-Christian religious leaders, members of the judiciary,civil service,police & military should be sanctioned. No travel to UK (including via UK airports), ask EU to ban travel to EU,& all UK assets & bank accouts frozen, including forSudanese companies.

Rape is Rape, regardless whether committed by a husband or someone else. Noura stabbed her husband in self defence, she should not be charged with murder.
Girls of any age should not be forced by their families or anyone else to marry.

This is rape of a child – totally unacceptable. The family should be ashamed, how they have let down this innocent child. Its the men who helped a rapist who should be facing death. They should already be dead for crimes against humanity.

The father should face justice, the husband and the government that is allowing this to happen on a regular basis

How girls and women are treated in some countries is just appalling. This IS JUST ONE CASE OUT OF A THOUSAND. Perhaps GLOBAL LEADERS should address the policy and the religious stance of these countries rather THAN RUNNING JUST ONE PETITION FOR JUST ONE CHILD BRIDE. JUST SILENCE ON THESE GOVERNMENT S ATTITUDES TOWARDS CHILD MARRIAGE, FEMALE GENITAL MUTILATION
Plus sadly so much more

It gives hope that this is going around the internet, because until you change a culture from within itself, these family slaves will continue to suffer under this law. I hope the rest of the world will raise their voices and support Norah