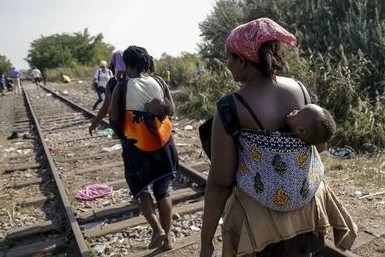 In some Nordic asylum centers, migrant under-age wives are allowed to continue staying with their older husbands, and it is causing quite a debate…

Authorities explained that in some cases, they felt it was less traumatic for the girls than separating them because of the hardships they have already endured as refugees fleeing the wars in Afghanistan or Syria. Also, some of the girls are claiming to be adults.

Both these issues have caused unease in Scandinavia, where critics say that the authorities risk complicity in child abuse. Of 31,000 asylum seekers who arrived in Norway in the past year or so, 10 of those aged under 16 — the minimum local age for sex or marriage — were married and four had children, the Norwegian Directorate of Immigration (UDI) said.  Of the 10 “some live in adult asylum centers, some in their own rooms and some with their partners,” it said in emailed replies to Reuters questions.

Heidi Vibeke Pedersen, a UDI official, says, “Minors seeking asylum are in a difficult situation where they have left their homeland, family and friends, and the partner they have traveled with can be the only person they know and trust in Norway.”

Child protective authorities are now looking at cases from as far back as 2015.  And if the rules are tightened, it means that couples who are arriving will be separated.  Some child advocates from agencies say that any wife under 18 should be placed in a center for children.  “To place them with their partner in facilities rigged for adults is not acceptable,” said Camilla Kayed, of the Ombudsman for Children Norway, an official watchdog for children’s rights. She added that European rules for separating child brides are not clear.  Oslo had “unfortunately not ratified” conventions by the Council of Europe that mapped out methods to stop sexual exploitation.

To read the entire article, click on the link below. [By Alister Doyle] (Reuters) –