Nobel Peace Prize Winner Urges World to Act - FreedomUnited.org
This website uses cookies to improve your experience. We'll assume you're ok with this, but you can opt-out if you wish.Accept Read More
Skip to content
Back to Global News 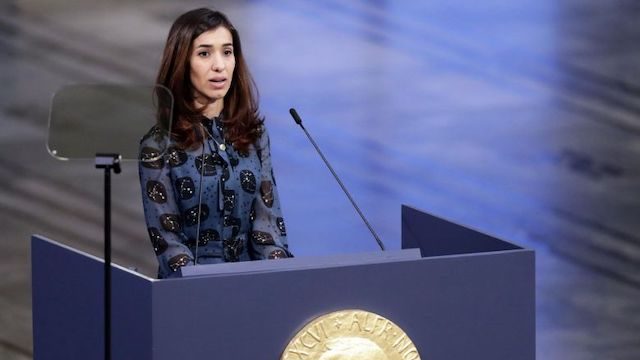 Nadia Murad accepted the Nobel Peace Prize this Monday in Oslo, urging the world to help free the hundreds of Yazidi women and girls still being held by ISIS militants.

Murad survived sex slavery at the hands of ISIS fighters in Iraq and has since become a leading voice for the Yazidi people.

The 25-year-old shared this year’s Nobel Peace Prize with Dr. Denis Mukwege, a Congolese doctor who has spent more than two decades treating women who have been raped or sexually abused in the Democratic Republic of Congo’s war-torn east.

“The protection of the Yazidis and all vulnerable communities around the world is the responsibility of the international community,” Ms Murad told the ceremony in Oslo.

Ms Murad wept during Ms Reiss-Andersen’s description of the suffering of her people.

She survived the horrors of captivity under the ISIS where they targeted Ms Murad’s Kurdish-speaking community.

Older women and men faced summary execution during the ISIS assault, which the United Nations has described as a possible genocide. Captured in 2014, she suffered forced marriage, beatings and gang-rape before she was able to escape.

Despite growing concern about the oppression of the Yazidi people, the fate of some 3,000 Yazidi women and girls is still unknown.

“Young girls at the prime of life are sold, bought, held captive and raped every day,” said Murad.

“It is inconceivable that the conscience of the leaders of 195 countries around the world is not mobilised to liberate these girls.”

Yazidi women nor anyone else in that part of the world should be seen as simply collateral damage caused by the international weapons industry and their governments’ war machine. Of course they must be rescued! And ideally war anywhere stopped, but the warmongers would argue against that emphatically, insisting that they are keeping thousands of people in jobs. Shameful!!!

In my opinion, the only way for ending all miserable situation humankind led themselves is through an introspective rethinking of all religions aligning the behavior of their sheep to an acceptable form of co-living in society, with respect and consideration for the next.

There probably is not that many that are still held captive by daesh, many died in Raqqa and Mosul as human shields, others were sold to other states like Saudi Arabia and will never be found, or used as organ donors, others committed suicide or were executed by daesh or sold to sex traffickers and are now in Turkey or European brothels, others won’t declare themselves through shame or fear of retribution by others or won’t give up their children born of rape.

Dears,
I am Muslim and I believe that ISIS are not representing the real Islam .
Islam is peace and mercy.

I feel proud to my sister in Iraq “ Nadia Murad “ and I want to tell her that I am with her and all real Muslims are with her and Yazidis too.

It is just so sad that this happens to females. I hope things get better. This is on my Holy Spirit.