NHS, High Street Condoms Linked to Malaysia Abuses - FreedomUnited.org
This website uses cookies to improve your experience. We'll assume you're ok with this, but you can opt-out if you wish.Accept Read More
Skip to content
Back to Global News 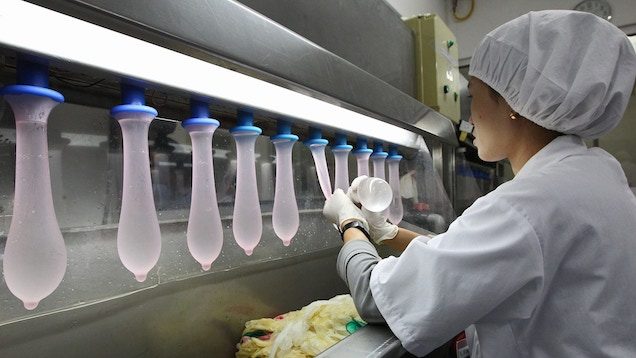 A condom factory in Malaysia that has supplied the National Health Service and major brands Tesco, Boots, and Superdrug is coming under fire for subjecting workers to ‘shameful’ treatment.

An investigation by The Telegraph found that migrant workers at Karex, the world’s largest condom-making company in Malaysia, are living in cramped dormitories, with up to 12 workers in damp and unhygienic rooms. Workers also reported major security concerns, with migrants being targeted by local gangs near the factory.

“Sometimes poisonous snakes come in,” said one Karex worker. “The hostel is not ok. We cannot survive like this.”

Migrant workers at Karex said they were weighed down by exploitative recruitment fees back in their home countries and struggled to survive without daily overtime. While their basic monthly salary of 1,000-1,100 Ringgit [£190] meets Malaysia’s legal minimum wage, it is not a living wage.

On top of this, the Malaysian government is tabling a proposal for employers to withhold 20% of migrant workers’ salaries as a means to prevent them from running away — a clear attempt to control their movement and a move that would make it even more difficult for workers to meet basic needs or send remittances home.

According to Forbes, Karex produces five billion condoms a year, accounting for roughly 15 per cent of the world market.

Karex owns the Sussex company Pasante Healthcare Ltd, through which distributes its products in the UK. Pasante’s website says its condoms are the “brand of choice” for many in the NHS. Its clients include Tesco, Boots, Superdrug and Costco.

Globally Karex boasts a “clientele of governments, NGOs, brand owners and retailers in over 130 countries”. These have included Marie Stopes International, Reckitt Benkiser, the owner of Durex, and Global Protection Corp, which distributes the ONE condom brand.

Karex said on Wednesday that it “does not believe that forced labour or modern slavery is currently occurring at our factories”.

However, Goh Miah Kiat, the Karex CEO, said the company recognised it was “critical to shed light on unfair labour practices” and took the allegations “extremely seriously”.

In response to the allegations, Karex said it would hire “an independent firm specialising in ethical trade, human rights, labour standards” to carry out a “full social analysis” within 45 days.

An NHS Supply Chain spokesperson said: “We take all allegations concerning labour standard abuses very seriously and have contacted the supplier about this matter.”

Superdrug said that it had conducted an audit of its supply chain just last week, finding no issues. Still, it has temporarily suspended orders from Karex based on the Telegraph report.

Tesco also visited Karex last week, but identified “a number of serious concerns.” It has now suspended Tesco production at the site pending further investigation, adding that “Everyone who works for, or with Tesco, has a right to be fairly treated.”

Durex is also in conversation with Karex, which it says only makes 1% of its condoms, to take corrective action. Marie Stopes International last ordered from Karex in 2017, but based on the new allegations said “we can confirm that we will not place orders with Karex in the future.”

Sad situation! no one should jhavbe their wage witheld just to keep them bound to that job!

It’s no different here in fascists North America. Most are tied to their shit job through our broken economic system. And debt.
Mindless slaves consuming our planet into oblivion. Do they have it worse. No doubt. Less creature comforts

“And they shall have films beer football and above all. Gambling to fill the horizons of their minds. Controlling them was easy “

Humans are SO predictable

Looxury! They get an actual hostel to live in! Building workers from Southern Philippines in Sabah live in plywood sheds they have to buildthemselves and the minimum wage is only 900 ringgit. The number of workers and their families is reputedly higher than the local population but their numbers arent counted.

Improving working conditions in factories is important to generate a positive trend for workers in even more vulnerable sectors such as construction industry. It is easier to target export-oriented productions to achieve an improvement for all the workers in the country.

The torture should end.