NHS Admits Surgical Tools Could be Made from Child Labor - FreedomUnited.org
This website uses cookies to improve your experience. We'll assume you're ok with this, but you can opt-out if you wish.Accept Read More
Skip to content
Back to Global News 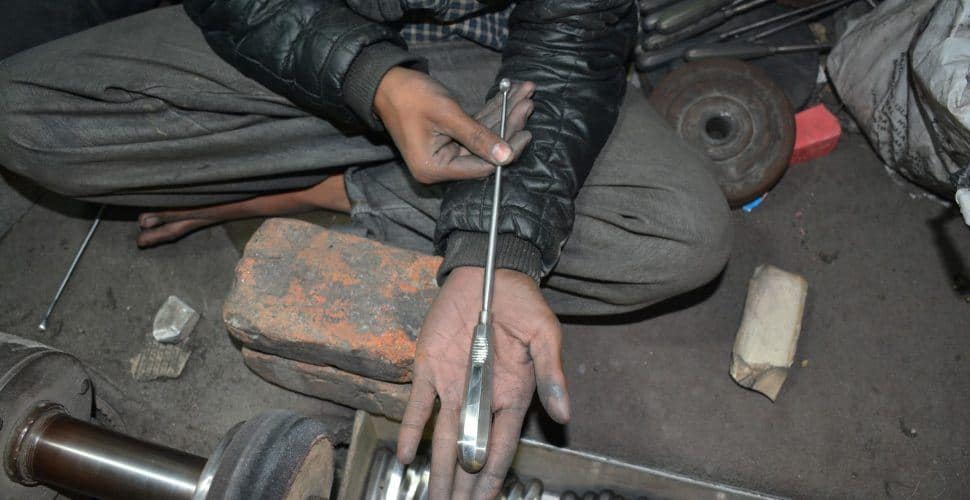 NHS Admits Surgical Tools Could be Made from Child Labor

Doctors in the UK may very well be using surgical tools made by children as young as 12 years-old according to The Guardian. Pakistani children thousands of miles away in Sialkot, Punjab, where 99% of Pakistan’s surgical instrument production is centered, were found to be producing the tools in cramped workshops where metal dust fills the air. No masks, goggles, or other safety equipment were present.

Three companies that export these tools to the UK say they buy from these workshops using child labor.

The Guardian reports that doctors are also concerned about NHS’ potential link to child labor.

NHS Supply Chain, among the largest suppliers to the NHS, bans child labour from its “first tier” suppliers, most of whom are based in the UK. However, it admitted it does not know which manufacturers are used in Pakistan.

Dr Mahmood Bhutta, an NHS surgeon and founder of the British Medical Association’s (BMA) Medical Fair and Ethical Trade Group, said: “For many of the instruments I use, I have no reliable way of ensuring they have not been made by children.”

“We still don’t know where most surgical instruments coming into the NHS are made. But we do know a lot of them will have come from Pakistan. I would be amazed if at least some of the instruments used in the NHS weren’t made in these small workshops.”

Campaigners say one of the main problems is that the UK’s Modern Slavery Act only covers private companies, meaning that the government’s own supply chains — like those of NHS — are not scrutinized as closely. Lola Young, Baroness of Hornsey, is looking to fix this gap by introducing a bill that would require public institutions to issue statements on slavery and trafficking in their annual reports and accounts.

One 12-year-old interviewed by The Guardian, Zain, said he started working in the surgical instrument workshops eight months ago after his father died. He works eight hours a day, six days a week, just to bring home $25 a month.“I know it’s dangerous, but I have to pay some debts and support my family,” he said.

Pakistan is a supporter of the UN’s sustainable development goals, which call for an end to child labor by 2025. Current laws technically ban those under 18 from working in “hazardous conditions” and those under 14 from working at all. Yet children like Zain really have no other option to survive.

Thank you to Dr Mahmood Bhutta, the BMA Medical Fair & Ethical Trades group & the Guardian for shining a spotlight on this unacceptable situation. All manufacturers need to trade ethically & humanely. NHS… please find alternative sources for these products until the original providers can demonstrate sustainable, safe, ethical & humane manufacture. Thank you.