Nestle Admits Slavery in Supply Chain - FreedomUnited.org
This website uses cookies to improve your experience. We'll assume you're ok with this, but you can opt-out if you wish.Accept Read More
Skip to content
Back to Global News 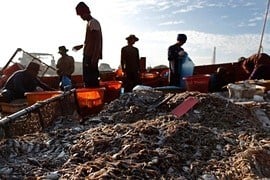 Nestle admits slavery in its supply chain, specifically in the Thai seafood industry…

The company was praised by many for admitting this, but now it is coming to light that much of the supply chain is hidden.  Customers were shocked to learn they were unknowingly purchasing products that had been produced by migrant workers who were unpaid and abused.

Following the revelations, Nestle said it was moving into a new era of self-policing of its own supply chains. A year-long investigation by the company confirmed media reports that the seafood industry in Thailand is riddled with forced labour and human trafficking and that slave labour was involved in the production of its Fancy Feast catfood brand.

The company also said that it was unavoidable, that any company getting seafood from Thailand would have been exposed to a degree of risk.

Magdi Batato, a Nestle vice president wrote, “As we’ve said consistently, forced labour and human rights abuses have no place in our supply chain. Nestlé believes that by working with suppliers we can make a positive difference to the sourcing of ingredients.”

The Freedom Fund’s Nick Grono said Nestle’s admission and commitment toward change is a positive move for change as far as holding companies accountable: “Nestle’s decision to conduct this investigation is to be applauded. If you’ve got one of the biggest brands in the world proactively coming out and admitting that they have found slavery in their business operations, then it’s potentially a huge game-changer and could lead to real and sustained change in how supply chains are managed.”

The report can be read in a report compiled by a U.S. accountability business called Verite… research.  Verite works with companies trying to make improvements in their supply chain and to become more transparent.  Their chief executive, Dan Viederman: “I really hope that the recent examples help mobilise companies to be bolder and investigate more deeply because soon the reputational damage in not doing so could be considerable.”

To read this entire article about Nestle admits slavery in its supply chain, click on the link below