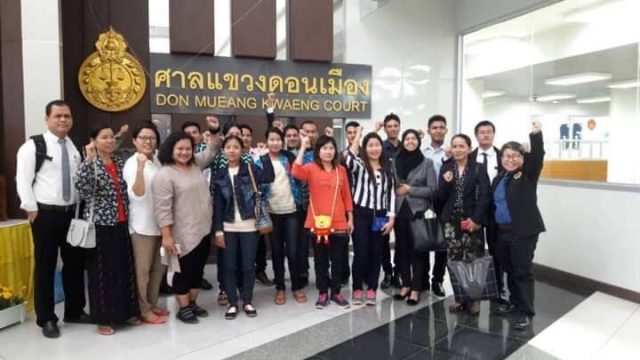 In a landmark ruling, a Thai court dismissed all criminal defamation charges against migrant workers from Myanmar who accused a Thai chicken farm of labor exploitation.

The 14 migrant workers first filed a complaint with Thailand’s National Human Rights Commission (NHRC) in 2016 alleging that they were being paid under the minimum wage, had their passports taken away, and had limited freedom of movement.

On Wednesday, a judge said he believed that the workers filed the NHRC complaint against the Thammakaset chicken farm in “good faith”, and without false information.

“This is a very good verdict for all migrant workers in the country,” said Nakhon Chompuchat, a lawyer for the defendants.

“It says workers need not be afraid to speak up against violations by their employers. The workers are very happy,” he told the Thomson Reuters Foundation by phone.

If convicted, the workers faced up to one year in prison and fines.

Their former employer, Thammakaset farm, which supplied the Thai food conglomerate Betagro, denied the charges from the outset and launched a lawsuit against the workers, saying the complaint has damaged its reputation.

Betagro, which sells to companies around the globe, later said it had cut ties with the farm.

The chicken farm owner has denied any wrongdoing and said he could not immediately comment on the verdict.

“The Thai court today sent a strong message to businesses that the authorities guarantee the right of alleged human rights victims to submit complaints . . . without fear of retaliation,” she said.

“Migrant workers’ contributions are vital to Thailand’s economic development. It is important that the Thai government adopts policies that protect their rights.”

Earlier this year the UN Working Group on Business and Human Rights visited Thailand, calling on Thai businesses to prevent exploitation and the Thai government to protect migrant workers.

One member of the working group, Surya Deva of City University of Hong Kong, said the verdict today should prompt companies “to work collaboratively with critical voices and address legitimate grievances of migrant workers.”

It’s not defamation if it’s true. I hope they received all the back pay they earned. That sends the strongest message to slavers.

We all need the hope this verdict brings, proving humanity has a chance and corporations can make good choices for mankind and their companies.