Most Girls Kidnapped by Boko Haram Still Missing - FreedomUnited.org
Skip to content
Back to Global News 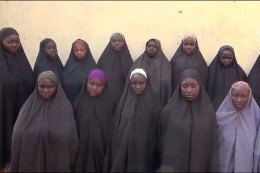 Most of the 278 girls kidnapped from their school dorm in Nigeria two years ago by Boko Haram, are still missing. When the news was first released, it caused global outrage and protests…

That footage that broke hearts around the world, underlining the ongoing suffering of the Chibok mothers — and the unimaginable plight faced by their daughters.

From protesters marching in Nigerian cities to social media users in distant countries raising their voices, the story stirred fresh outpourings of anger and frustration. Anger at the atrocity itself, but also at the official response. How was it that two years after Boko Haram kidnapped 276 girls from their school dormitory, the Nigerian government and the global community — which had expressed so resolutely its determination to #bringbackourgirls — had failed to rescue the 219 still missing? 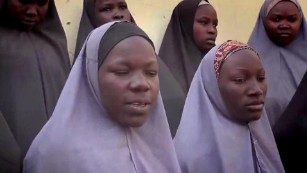 The video is thought to have been made in December while negotiations were going on between Nigeria and representatives of Boko Haram.  It was obtained exclusively by CNN.  It showed 15 girls wearing robes and identifying themselves. A classmate of the girls also identified her friends from the footage.
This article begs two questions:
1. How was it that two years after Boko Haram kidnapped 276 girls from their school dormitory, the Nigerian government and the global community — which had expressed so resolutely its determination to #bringbackourgirls — had failed to rescue the 219 still missing?
2. And why had the Nigerian government — believed to have been in possession of the video since mid-January — failed to inform the families of the missing girls it had the film, the first glimmer of hope their daughters were still alive?
Regular citizens as well as well-known figures like Michelle Obama demanded, bringbackourgirls.  One Twitter user from Maryland, Derrick Gladden, expressed his frustration:  “We are the United States, all our resources, satellites, and badass attitude and we can’t help?”
To read the entire article, click on the link below.