Malaysia's Domestic Workers Criminalized for Running Away from Abuse - FreedomUnited.org
This website uses cookies to improve your experience. We'll assume you're ok with this, but you can opt-out if you wish.Accept Read More
Skip to content
Back to Global News 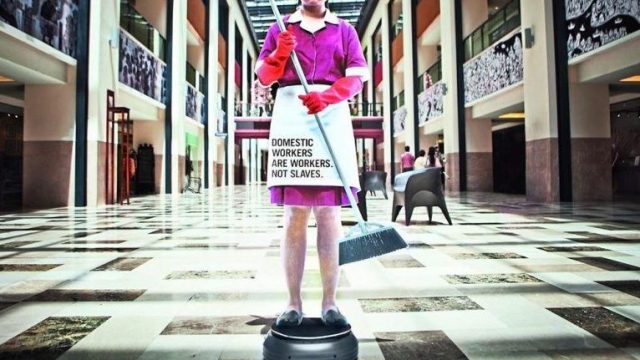 Malaysia's Domestic Workers Criminalized for Running Away from Abuse

Malaysia has over 250,000 domestic workers — most of whom are migrants from neighboring Southeast Asian countries. They may work full-time, but they are disqualified from the most basic protections including fixed working hours, leave days, medical coverage, or even fair wages.

Anti-trafficking NGO Tenaganita says that the government can expect domestic workers to continue to face abuse until tougher laws are passed to protect them.

Glorene Dass, Executive Director of Tenaganita, spoke to The Star about how domestic workers who run away from abusive employers can actually be criminalized as they become undocumented workers:

“Domestic workers are in a bind. The Employment Act doesn’t protect them and if they choose to get away from their abusive employers by running away, they are automatically declared as undocumented workers – this denies them access to justice.

They are then criminalised and can be prosecuted under the Immigration Act. It seems like the authorities, enforcement agencies and even the judiciary continues to punish the victims who really are powerless.

“This is what we are trying to change,” says Dass.

Dass added that if victims do file charges against abusive employers they’re put into a bind as they are barred from working.  “It’s frustrating and demotivating and most of the time, these women just would rather go home,” she says.

The Domestic Workers Coalition says their demands are simple — pass a law that gives both Malaysian and foreign domestic workers protections.

“What does that mean? That they work eight hours a day. They have a proper living space with a bed and so on. They have to have a rest day. They need three proper, full meals. They need to be paid. All this must be stipulated clearly,” says Dass.

Chairperson for the Bar Council’s Migrants, Refugees and Immigration Affairs Committee Datuk Seri M. Ramachelvam even advocates for the country to adopt C189.

“The Malaysian Government should ratify and adopt the Convention 189 – Convention on Decent work for Domestic Workers which guarantees labour protections to domestic workers on par with other categories of workers while allowing considerable flexibility in implementations. This must become a reality,” he said.