Macron: 14 EU States to Assist in Libya Migrant Detention Crisis -
This website uses cookies to improve your experience. We'll assume you're ok with this, but you can opt-out if you wish.Accept Read More
Skip to content
Back to Global News 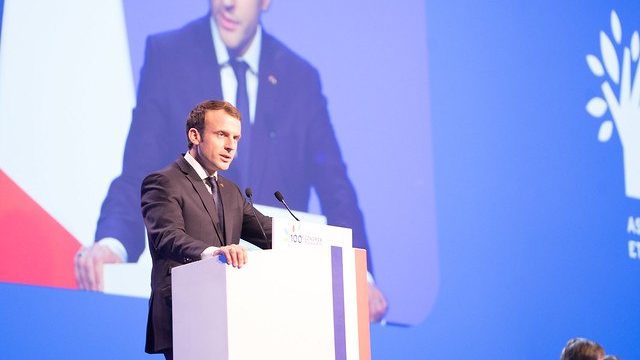 French President Emmanuel Macron has announced a potentially promising “solidarity plan” proposed by Germany and France to help resettle refugees and migrants trapped in Libya’s migrant detention centers. The UN has called on these detention centers to be closed following an airstrike that killed 53 and several reports of forced labor, disappearances, and disease within the facilities.

So far 14 European Union states have backed the proposal.

“Of those 14, eight have enacted their co-operation, and their participation in the stable mechanism which would allow the commissioner to act on requests and the response of the eight member states in the necessary spirit of solidarity,” said Macron.

However, Italy did not take part in the meeting and Italy’s Interior Minister Matteo Salvini warned against decisions “solely taken in Paris and Berlin.”

Macron also said on Monday that France had asked the Libyan government to ensure migrants and refugees would no longer be placed in custody in the country and that appropriate measures would be taken to ensure their safety.

Libya is one of the main departure points for migrants and refugees fleeing poverty and war in the Middle East and Africa and attempting to reach Europe.

An estimated 6,000 refugees and migrants are held in detention centres across Libya, while some 50,000 registered refugees and asylum seekers reside elsewhere within the country, according to the UN’s refugee agency.

The UN has repeatedly cautioned the country is not a safe place for migrants and refugees to be held and called for those in detention centres to be released. Despite those warnings, the EU has continued with its policy of backing the Libyan coastguard, which attempts to intercept and forcibly return people caught while trying to cross to Europe from the country.

Medical NGO Doctors Without Borders (MSF) has been outspoken in condemning the EU’s approach to Libya, saying the “suffering” of migrants and refugees in Libya and “deaths” of others in the Mediterranean were “preventable”.

“Politicians would have you believe that the deaths of hundreds of people at sea, and the suffering of thousands of refugees and migrants trapped in Libya, are the acceptable price of attempts to control migration,” said Sam Turner, MSF’s head of mission for search and rescue and Libya.

“The cold reality is that while they herald the end of the so-called European migration crisis, they are knowingly turning a blind eye to the humanitarian crisis these policies perpetuate in Libya and at sea,”

Why not have those Libyans go to Muslim countries?

Which “Muslim countries” do you have in mind? Lebanon and Turkey are overflowing with refugees.

It’s always the same thing: most people don’t want refugees to enter Europe yet politicians ignore their view and take more and more refugees. Eventually Europe itself will become an unsafe place for refugees.