Labour Accuses May of 'Hollow' Modern Slavery Pledges - FreedomUnited.org
This website uses cookies to improve your experience. We'll assume you're ok with this, but you can opt-out if you wish.Accept Read More
Skip to content
Back to Global News 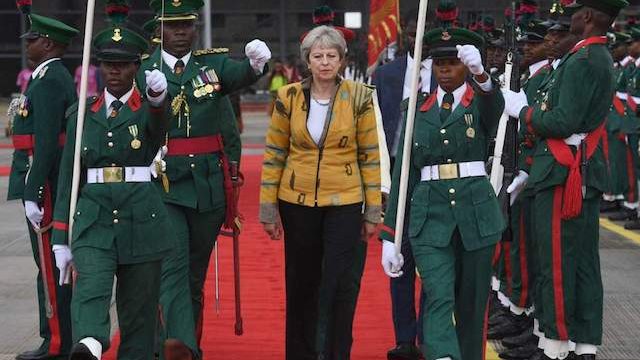 The Labour party is accusing Prime Minister Theresa May of making ‘hollow’ promises to tackle modern slavery during her visit to Nigeria.

May was in Lagos, Nigeria as part of a 3-day tour of Africa, where she called modern slavery “one of the greatest human rights abuses of our time.”

As part of her trip, she unveiled new support from the UK for Nigeria to clamp down on human traffickers and provide counselling support for 1,700 victims of modern slavery returning to Nigeria from Libya.

However, as The Independent reports, Labour says May’s promises to Nigerians contradict her shortcomings to support victims in the UK:

“A strong coordinated response is needed, but on her watch the Tory government has cut budgets, Border Force staff and axed 21,000 police officers. They are the frontline in the fight against modern slavery.”

She added: “Instead of supporting the victims of modern slavery the Home Office regularly detains trafficked women in centres like Yarl’s Wood, causing vulnerable women so much pain.

“In government, Labour will close down Yarl’s Wood and Brook House detention centres. We will commit the millions saved to fund services that support survivors of modern slavery trafficking and domestic violence.”

We will add hundreds of new border guards and ten thousand new police officers to tackle the scourge of modern slavery head-on.”

Theresa May also announced that the UK would work with France to help Nigeria and Niger strengthen its borders to reduce human trafficking.

“Because this is an international problem which needs international response, we are also launching a new project with France to strengthen border cooperation to prevent trafficking along key migration routes towards Libya and Europe,” she said.

“But as well as targeting the smugglers and traffickers that cruelly exploit people for financial gain, it’s vital that we support the victims who have suffered enormous trauma and are at high risk of being re-trafficked, and that is an important part of the support we are announcing today.”

Nigeria is the fifth most common country of origin for modern slavery victims in the UK. Notably, UK-funded border agents at Lagos airport helped secure the prosecution of Josephine Iyamu, the first British citizen to be convicted under the Modern Slavery Act.