Kyrgyzstan Sentences 'Bride Kidnapping' Killer - FreedomUnited.org
This website uses cookies to improve your experience. We'll assume you're ok with this, but you can opt-out if you wish.Accept Read More
Skip to content
Back to Global News 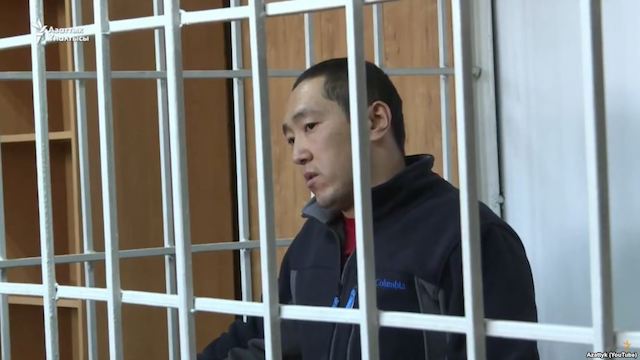 Mars Bodoshev guilty of abducting Burulai Turdaaly Kyzy to force her to marry him, and then killing her. Photo credit: Radio Free Europe

Kyrgyzstan has sentenced a man to 20 years in jail for kidnapping his bride and proceeding to kill her.

Sverdlov District court in Bishkek found Mars Bodoshev, 29, guilty of abducting Burulai Turdaaly Kyzy to force her to marry him, and of killing her. It is a case that has sparked public outcry.

Akmat Seiitov, who helped his friend in the kidnapping, was also sentenced to seven years in prison.

Turdaaly Kyzy was stabbed to death at a police station in the northern province of Chui on May 27, when police who had detained her and her abductor left them alone in a room together.

Several senior police officers were fired as a result, while others received punishments ranging from warnings to demotion.

Following the killing of Turdaaly Kyzy, hundreds of people protested in Kyrgyzstan against the practice known as bride kidnapping.

The practice is illegal in Kyrgyzstan, and lawmakers raised the maximum prison sentence from three to 10 years in 2012, but prosecutions have been rare.

Despite being illegal, the UN says 13.8 percent of women in the ex-Soviet republic younger than 24 are forced into marriage with their abductors.

“We know that kidnapping is commonly practiced but few statements are made to police and even fewer cases go to court,” she said.

“Hopefully after this case law enforcement and society as a whole will treat the crime more strictly.”