"I'm a Victim of Slavery but I'm Just Seen as an Immigration Problem" - FreedomUnited.org
This website uses cookies to improve your experience. We'll assume you're ok with this, but you can opt-out if you wish.Accept Read More
Skip to content
Back to Global News 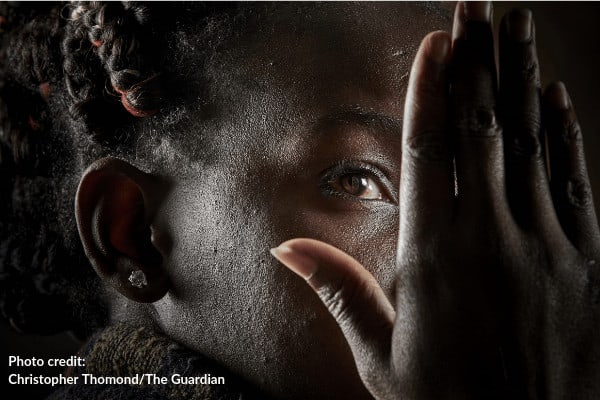 Nancy Esiovwa escaped slavery five years ago in Bedfordshire, where she was beaten and worked without pay in a family home.

But she says her life now is as traumatic as it was when she was held in captivity by her traffickers.

Petition for Nancy: Sign to join our call for Nancy to be given a chance to recover.

Nancy was recognized by the UK as a victim of modern slavery in 2014, but was left with almost no support from the government. She ended up homeless and destitute, and the Home Office has rejected her application for asylum and refused to grant her leave to remain.

She lives in fear of being thrown in immigration detention or deported to Nigeria, the same country to which her traffickers, who have threatened to kill her, have returned.

Her story is not unique. The Home Office has been under increasing pressure to improve their treatment of slavery victims. Frontline agencies say people are being abandoned and failed in their thousands by a system that is supposed to protect and support them.

Esiovwa has decided to fight back. She is taking the Home Office to court over its decision to deny her leave to remain, arguing that it failed in its legal obligation to consider her trafficking status and right to access ongoing counselling and mental health services. The case follows a landmark ruling in 2018 that forced the government to lower the threshold for allowing trafficking victims leave to remain; currently, only 12% of victims who apply get a positive decision.

“I don’t feel that my trafficking status, or my very urgent need to get mental health support to recover from what I’ve been through, both at the hands of my traffickers and at the hands of the Home Office, have been considered,” she says.

“Everyone thinks that when you escape from slavery it is a happy ending, but that’s not true. Even though the government has accepted I’ve been a victim of slavery, they have just seen me as an immigration problem that they want to get rid of.”

Nancy has also launched a network for survivors of modern slavery in West Yorkshire, explaining that “For years I could find nobody to help me. So I thought that we survivors need to start helping each other.”

Beyond providing support to survivors, the network advocates for survivors to lead in reforming public policy.

“We are stepping into a gap that charities and government agencies aren’t filling, because we know what we need better than they do,” she said.