Hungarians Protest Against 400 Hours of Overtime - FreedomUnited.org
This website uses cookies to improve your experience. We'll assume you're ok with this, but you can opt-out if you wish.Accept Read More
Skip to content
Back to Global News 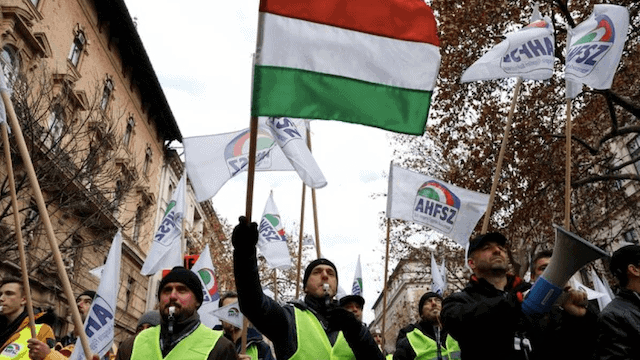 Hungarians Protest Against 400 Hours of Overtime

This Saturday thousands of Hungarians took to the streets to protest against a proposed new labor law that would allow employers to ask for 400 hours of overtime from their employees each year.

The bill’s critics call it the “slave law.”

Banners waved by trade unions and their supporters in the protests read “we protest against the slave law” and “force your mother to do overtime.”

The modification to the labour code submitted to Parliament this week has faced intense criticism, sparking the biggest street protest in over a year. Potentially, it could add two extra hours to an average work day, or the equivalent of an extra workday per week.

“We are all really upset about the way things are going in this country,” Zoltan Laszlo, vice chairman of the Vasas ironworkers union, told Reuters. “This government just makes laws with scant consultation of those affected.”

“Our health status is already abysmal. People who make these kinds of laws work against society. We’ll show them that we can take our fate into our own hands. We are willing to turn a lot harsher.”

Based on the version of the new bill posted on parliament’s website, employers are guaranteed an extra 250 hours of overtime per worker per year. However, for the rest of the 400 hours they would have to seek approval from their employees.

Lajos Kosa, the Fidesz lawmaker who was the original author of the changes, stressed that workers would still get paid for their overtime and that this bill does not change the current workweek of five eight-hour days.