Hundreds of Fishermen Still Stuck in Indonesia, Benjina Returnees Say - FreedomUnited.org
This website uses cookies to improve your experience. We'll assume you're ok with this, but you can opt-out if you wish.Accept Read More
Skip to content
Back to Global News 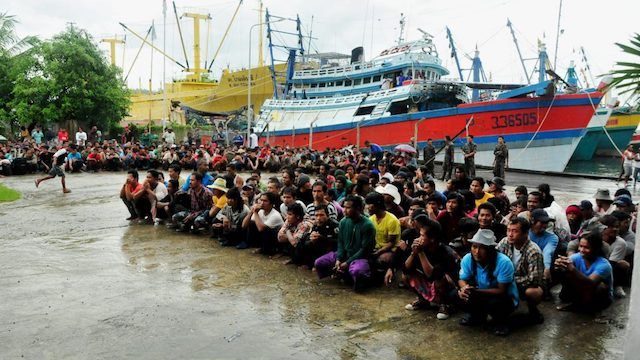 It has been three years since thousands of trafficked fishermen were found abandoned on Benjina, a remote island in eastern Indonesia. Yet according to two Thailand-based NGOs, the Labour Rights Promotion Network (LPN) and the Thai and Migrant Fishers Union Group (TMFG), hundreds more Thai, Myanmar, Cambodian, and Lao fishermen are still stuck in Indonesia.

LPN manager Patima Tungpuchayakul says that “Even though LPN and TMFG have rescued nearly 3,000 workers from Indonesia and returned them to the embrace of their family, we are still receiving distress calls from many workers in the Thai fishing fleet who are still stranded in Indonesia.”

At a seminar in Bangkok, representatives from LPN and TMFG said that the majority of rescued fishermen from mainland Southeast Asia have received little or no payment for their years of forced labor aboard Thai fishing vessels.

Thailand’s seafood industry has come under international scrutiny because of the Benjina case, with the European Union threatening to ban imports if abuses are not remedied. Yet returned fishermen, a senior government official, and a representative from the ILO told an audience at the Foreign Correspondents Club this week that forced labor, trafficking, and non-payment of wages continue to plague the industry.

One survivor from the Benjina case is Tun Lin. Originally from Myanmar, he came to Thailand to work but was trafficked on a fishing vessel to Indonesia. He says he has gone “from victim to hero,” now working with TMFG to rescue fellow trafficked fishermen.

“It took me about five months to get my compensation – about 300,000 baht (about US$9,400),” he said. “After I received that, I could have returned to my country again but I think there are still many victims … that still haven’t received any assistance yet, so I talked with LPN and former fishing crews on how we can collaborate to raise this issue and form our group TMFG.”

The Thai and Migrant Fishers Group is an unofficial union set up after the crisis in 2015. It is linked to LPN, which helps the 300,000 or so migrants in the seafood processing sector in Samut Sakhon and Mahachai.

The group is run by Sompong Srakaew, who first helped raise the alarm about the horde of fishermen stuck Benjina. Sompong said hundreds of foreign fishermen are still caught in Indonesia, because of a lack of identity documents or being deemed to have worked illegally.

LPN manager Patima Tungpuchayakul warned that captains of some vessels were determined to cheat and get around reforms imposed recently by the Thai government. One trick they used, she said, was presenting legal nets when boats are inspected, but then using illegal nets “that catch everything” at sea.

While such problems are persistent and difficult to counter, there have also been signs of progress, an ILO representative noted. The Thai government recently ratified the ILO protocol against forced labor and is now drafting a law against it. The Prayut Chan-ocha-led government has also committed to ratifying Convention No 188 on work in the fishing industry. That is expected to happen in a few months.

“This makes Thailand the first member country, the first country in Asia to ratify this protocol,” said Jason Judd from the ILO. And we’re still waiting to see the law that follows, the draft act, if it advances the law against forced labor in terms of victim protection.”

Still, Sunai Phasuk from Human Rights Watch explained that reforms taken by the Thai government may fail to remedy abuses in the industry, saying that vessel owners are simply moving to register their boats in Myanmar.