How One College Grad Escaped Bonded Labor in India - FreedomUnited.org
Skip to content
Back to Global News 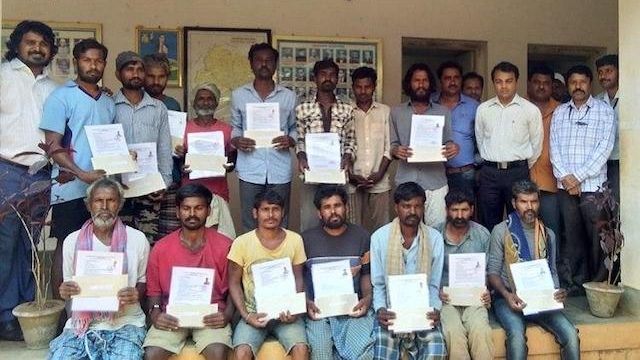 How One College Grad Escaped Bonded Labor in India

Thirty-eight-year-old Raghu Malleshappa Ballary is a college graduate who, along with 14 other men, was trapped in bonded labor on a ginger farm in India.

The men, whose ages range from 28 to 60, were forced to work on the farm for no money and very basic meals. Raghu says he was lured into the job while at at the Hubballi Railway Station, where daily-wage workers gather to find jobs.

“We were promised Rs 350 as our wages per day, good food, alcohol at night and told that the work would be from 9 am to 6 pm. We were also told that we can try it for 15 days, and if we don’t like it, we can go to Coorg in search of work,” he said.

“We were given one cup of black tea and then made to work. We didn’t know how to do the work in the fields, but we were beaten up and forced to work if we complained. It would continue till 6-7pm every day, whenever the sky grew dark, and we were only given frugal meals in between. If we complained of sickness, we were beaten then too,” he says.

The issue came to light after Raghu managed to escape from the farm, which then led to the rescue of the 14 people as well as the owner’s arrest.

“The man watching over us said that he is going to get food in five minutes and I decided to run for it. I ran and ran, until I found a bus and managed to reach Gadag,” he says.

After reaching Gadag, Raghu got in touch with the brother of one of the labourers and then the police. The police then reached out to the International Justice Mission for assistance.

International Justice Mission, which helped coordinate the rescue mission of the other bonded laborers, says that Raghu is one of the rare college degree holders to be a victim of bonded labor.

“But it proves that bonded labour has evolved beyond its traditional form where landless labourers were tied to feudal landlords,” said Indrajeet Pawar, the Director of Operations of International Justice Mission.

Since their rescue, all of the men have received their Release Certificates as well as an initial rehabilitation amount of Rs 20,000.