Hero Trucker - FreedomUnited.org
This website uses cookies to improve your experience. We'll assume you're ok with this, but you can opt-out if you wish.Accept Read More
Skip to content
Back to Global News 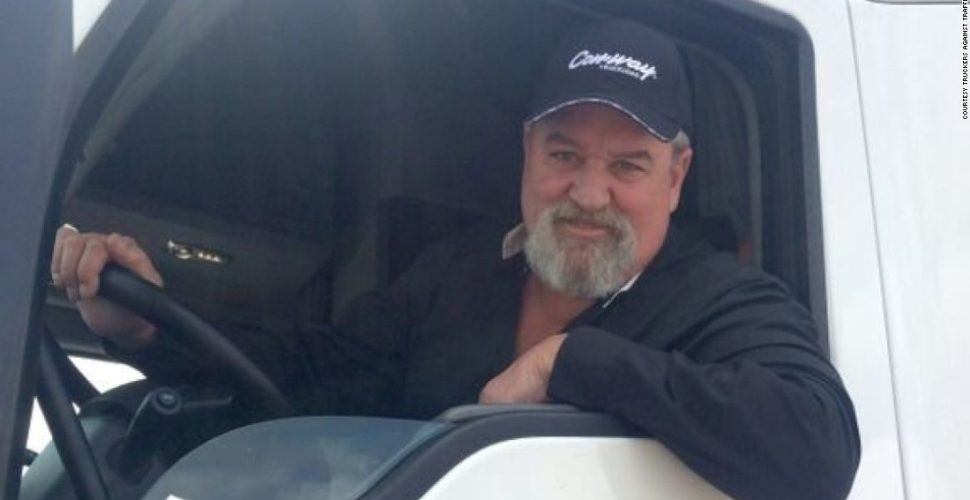 Truck driver Kevin Kimmel once knew little about human trafficking, but that all changed on the morning of January 6, 2015.  One day he pulled into a gas station in New Kent County, Virginia, and noticed an “unusual” family recreational vehicle parked in the lot. He recalls, “The thing that stuck out was that this was an old RV with black curtains which wasn’t very family-ish.”

He watched as a man approached the RV and knocked before entering. Moments later, it began to rock back and forth. Kimmel then saw what he thought was a “minor female” appear from behind the curtain before abruptly disappearing.  He immediately pulled out his smartphone and looked up the contact details of the local sheriff. Police cars were soon on the scene, ushering away what Kimmel describes as “a female in really bad shape.” A man and a woman in handcuffs soon followed.

Kimmel gave statements to the police and FBI, and for the next few months, her nothing more of the incident.  However, on the news that the woman was a 20-year-old sex trafficking victim. Lured from her home in Iowa, she was held against her will and became the subject of torture, sexual assault, and forced prostitution.  The traffickers were sentenced to 40 and 42 years respectively.

At trial it was revealed that the pair had driven nails into the victim’s feet, burned her with metal instruments heated up on the RVs stove and pimped her out at truck stops to men who answered ads online. The victim was never named publicly and reports at the time stated that she struggled to talk about what happened to her.

Kimmel’s quick thinking saved her; she may otherwise never have been freed. Kimmel speaks about his experiences at anti-trafficking events, explaining that truckers spend much time in the very places where victims are often exploited.   “[Traffickers] are constantly moving these people. They stay in the darkness. That’s why they can’t be anywhere too long. But when you’re moving them, then you come into my world. If we know the signs and are vigilant then we can make a big piece of this problem go away. We need to inform truckers about what’s really going on,” he adds.