Gulf Men in Indian Child Bride Racket - FreedomUnited.org
This website uses cookies to improve your experience. We'll assume you're ok with this, but you can opt-out if you wish.Accept Read More
Skip to content
Back to Global News 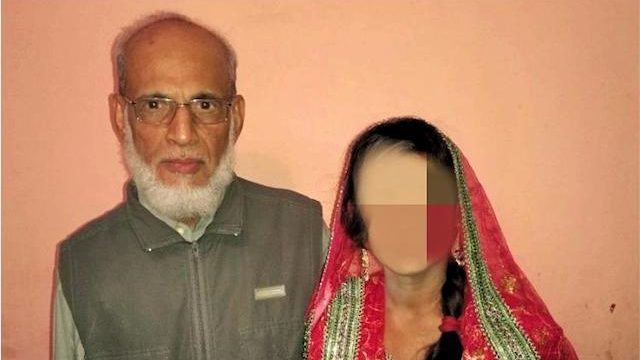 In September 2017, Indian police in Hyderabad uncovered a massive bride trafficking ring after a mother reported her 16-year old daughter had been ‘sold’ by her husband his his family to a 77-year-old Omani man for Rs 5 lakh.

The case led to the discovery of several other forced marriages and ultimately the arrest of 20 accused, including five from Oman, three from Qatar, and eight from other Arab countries.

Police said that the racket was run by agents in Hyderabad and Gulf countries, who lure poor Indian families to marry off their minor daughters to sheikhs and other rich foreign nationals.

It even encompassed clerics (qazi) who performed the marriage ceremony and forged documents to aid the trafficking of the girls out of the country.

Authorities believe that the racket has subsided in the last year, but anti-trafficking campaigners in India say not much has changed on the ground.

For close to two decades, Shaheen has been working on the ground and exposing the ‘child bride’ racket, conducting sting operations, rescuing victims, offering legal counselling and training the survivors to make them financially independent.

“It has not stopped and it won’t stop any time soon. It is a systematic problem and not easy to get rid of,” Jameela tells TNM.

There are two ways in which the racket continues to operate. In the first modus operandi, sheikhs and foreign nationals make arrangements to traffick young women and minors to their country and perform the marriage there.

Or, they come to India on a short-term visa, ‘marry’, stay with the minor for two or three months in India and then ‘divorce’ them, Jameela says. The latter continues to thrive in the by-lanes of the old city.

Explaining the reason why such rackets thrive, Jameela says, “Agents identify families who live in abject poverty. Most of the times, the person who gives the minor away is usually the stepmother or the stepfather, if not a relative or a neighbour.”

Rehana, who works alongside Shaheen, explained that “There are male agents and female agents but only the latter work on the ground and scout slums…and identify vulnerable minors.”

“Following this, the female agents befriend the family and convince them to marry off their daughter to these sheikhs.” She says that the girls forced into marriage are usually between age 12 and 16.

“In all my years of conducting sting operations, I am yet to see a sheikh aged below 50,” she added.

Alarmingly, these sham marriages last anywhere from just two weeks to a few months, during which a sheik sexually abuses their new child bride. “Once the sheikh is ‘satisfied’, he divorces her and goes back,” Rehana adds.

It is even more troubling for trafficked girls who are taken back to the Gulf with their new husbands as embassies have little willingness or power to intervene.

For Jameela, the solution comes first by educating girls and sensitizing their families to this problem.

And in terms of policy, “We need to have a stringent check on aged foreign nationals entering the country and we must examine if their requests are genuine.”

“We must also keep track of women who are leaving on ‘khadama’ visas and with fake documents,” she said.