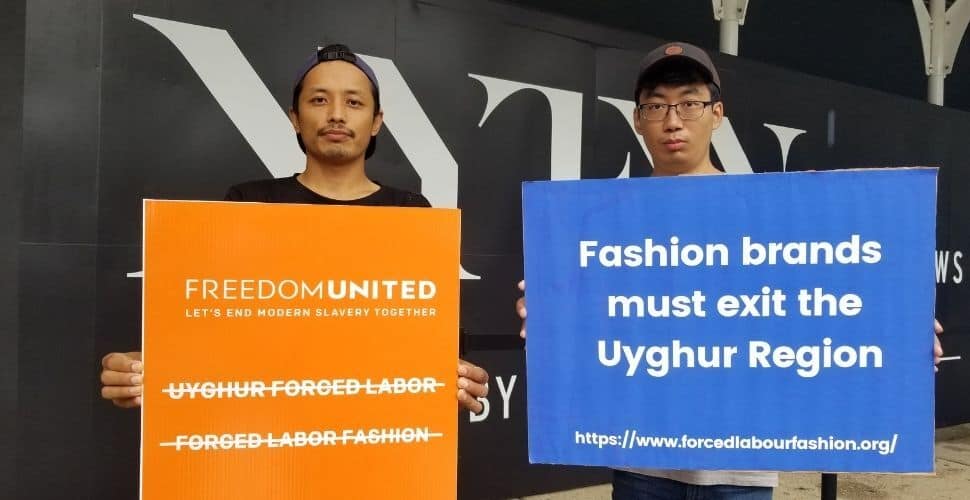 On September 9, Freedom United with our partners Campaign for Uyghurs, SumOfUs, No Business with Genocide and Uyghur Human Rights Project staged a protest outside the main show venue for New York Fashion Week 2021, Spring Studios.

Dozens of advocates from human rights organizations including Jewish Movement for Uyghur Freedom and Students for a Free Tibet, turned up on the rainy morning to show a united force against Uyghur forced labor as fashion enthusiasts arrived to attend fashion week events.

Models dressed in black with labels representing problematic fashion brands that have been identified as having ties to Uyghur forced labor, such as Zara, Nike and Uniqlo, stood in silence among the protesters.

Since March 2020, consumers and corporations have been even more aware of the labor behind their labels. With researchers piling up evidence of hundreds of thousands of Uyghurs (the Muslim Turkic ethnic group predominantly living in Xinjiang) performing forced labor in the Xinjiang region of China, everything from cotton and clothing to tomato products has been under sharp scrutiny.

Amid the U.S.’ tightened sanctions on such products, brands including Nike, Zara, Uniqlo and Hugo Boss have been called out for ties with forced labor or tainted cotton in their supply chains.

Speakers included Students for a Free Tibet Campaigns Associate, Lobsang Tseten, who condemned corporate complicity in Uyghur forced labor to protect business interests. “It pains me to hear about Uyghurs in concentration camps…forced into labor camps and it equally infuriates me to learn about these brands that are profiting out of production from the forced labor camps.”

Omer Kanat, director of UHRP, addressing the rally, thanked organizations like Freedom United for giving hope to the movement to free Uyghurs.

Freedom United has been campaigning against Uyghur forced labor for over a year and sits on the steering committee of the Coalition to End Forced Labour in the Uyghur Region which is endorsed by around 400 organizations and Uyghur groups. Through the coalition, we urge brands to exit the Uyghur Region.

“To show the world that people matter more than profits, all fashion brands must sign the Call to Action to end forced labor in the Uyghur Region. The scale of persecution and exploitation is now undeniable and it’s beyond time for those who have yet to sign to step up.” Joanna Ewart-James, Executive Director of Freedom United.

Along with our partners, we also organized a digital runway video released on the same day featuring activists, influencers and Sweden-based fashion designer, Louise Xin, calling on fashion brands to cut ties with Uyghur forced labor. Xin recently made the cover of Vogue Scandinavia for the digital launch of her new collection bringing attention to the plight of Uyghurs and calling for brands to sign the Call to Action.

Although some brands have signed onto the Call to Action, most have not. The fashion industry must be made aware that people will no longer accept inaction.

More than 80,000 have now added their name to Freedom United’s petition calling for an end to the Chinese government’s forced labor system.