Eritrean Conscripts Wait in Vain for Freedom - FreedomUnited.org
This website uses cookies to improve your experience. We'll assume you're ok with this, but you can opt-out if you wish.Accept Read More
Skip to content
Back to Global News 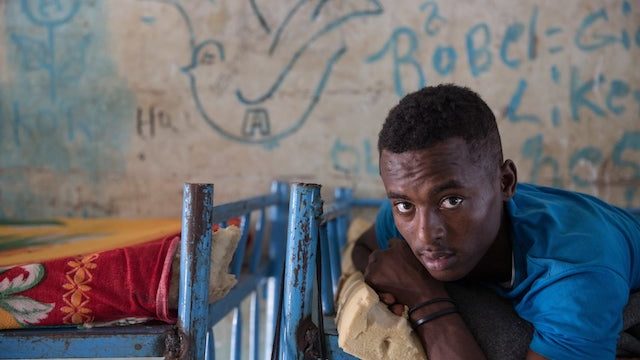 A teenage boy in a dormitory in Sudan. Tens of thousands of Eritreans live in the camps after escaping military service. Photograph: Sally Hayden/Getty Images

When Eritrea and Ethiopia signed a peace deal in July after a 20 year standoff, many hoped it would signal reforms in Eritrea.

Citizens wondered if political prisoners would be released, if notorious jails would be closed, and perhaps most critically, if the forced conscription of anyone aged between 18 and 50 would finally end.

Families were given hope at a recent graduation ceremony, reportedly attended by Eritrean president Isaias Afwerki, when a new batch of conscripts were told they would serve for no more than 18 months.

“All the mothers in Eritrea think their kids are coming back from the frontlines,” says Helen Kidan, from the Eritrean Movement for Democracy and Human Rights.

Yet as The Guardian reports, their hope may be met with disappointment:

Nothing has changed, say Eritrea watchers.

National service usually lasts between five and 10 years, but can last for up to 20. Conscripts often work 72-hour weeks in extremely harsh conditions with inadequate food and low pay. No one is legally entitled to take leave, which depends on the whim of commanding officers.

Although the pretext for conscription no longer exists, the rumours that it will be phased out are probably false, says Fisseha Tekle, a human rights researcher on Eritrea and Ethiopia for Amnesty International. “For the last 15 years, they were blaming Ethiopia. That excuse is no longer there, so it is high time for them to stop this scheme.”

Eritrean activists and analysts say the indefinite national service is less about conflict with Ethiopia than a way to keep people weak and unable to mount resistance to the government.

They suggest the authorities are unlikely to demobilise tens of thousands of militarily-trained men and women who bear a grudge against them, with no prospect of finding them alternative employment.

This isn’t the first time Eritrean officials have promised an end to indefinite conscription.

In 2015, Lord Avebury told the House of Lords the Eritrean ambassador had said conscription would be restricted to 18 months, but nothing changed.

Still, many Eritrean families continue to hope that this time will be different, that their children may soon be allowed to come home, get a job, have a family life and a future.

“And I don’t see how these hopes will be fulfilled.”