Displaced Congolese Children Forced into Cheap Labor - FreedomUnited.org
This website uses cookies to improve your experience. We'll assume you're ok with this, but you can opt-out if you wish.Accept Read More
Skip to content
Back to Global News 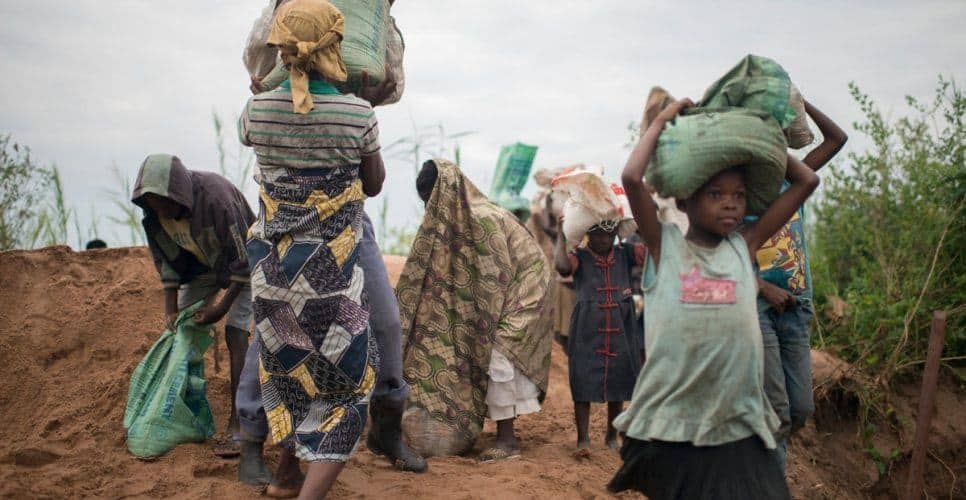 Children as young as five in the Democratic Republic of Congo are being forced into labor to ensure that their families can survive.

One such child laborer is fourteen-year-old Françoise. Every morning she and an army of other children head out into the streets on the outskirts of Kalemie, the capital of Tanganyika province. They are headed for the shores of Lake Tanganyika, where they pack sand into 25-kilogram sacks and transport the loads balanced on top of their heads.

“All of us here used to be in school; now we work to earn money to eat,” says Françoise, picking grains of sand from her scalp. “All the children complain because the sand is heavy and we get tired. I feel sick, my legs are in pain and my head hurts all the time.”

Sand is a popular, low-cost building material in the area. On a good day, Françoise can earn up to 30 cents for every 25 kilos she carries. But even that’s not enough to help the family make ends meet, says her father, Philippe Kika Malisawa, 58, who transports sand alongside his daughter.

“Our parents never made us work like this,” he recalls. “We just sat back and our father would bring us food. But now that we are displaced, we suffer tremendously.”

Scores of civilians have been forced to flee their homes. Now they are seeking refuge in squalid, overcrowded sites near and around Kalemie and in other parts of Tanganyika province. As more people struggle to sustain their livelihoods, children are being forced to work.

UNHCR, the UN Refugee Agency, says it has provided some assistance to displaced people in Kalemie, but families are still struggling.

“All my life has been about is fleeing war,” says Françoise, wiping sweat from her forehead. “I wish we could stop transporting sand and go back to school.”