Disneyland Nixes Pirates of the Caribbean Bride Auction - FreedomUnited.org
This website uses cookies to improve your experience. We'll assume you're ok with this, but you can opt-out if you wish.Accept Read More
Skip to content
Back to Global News 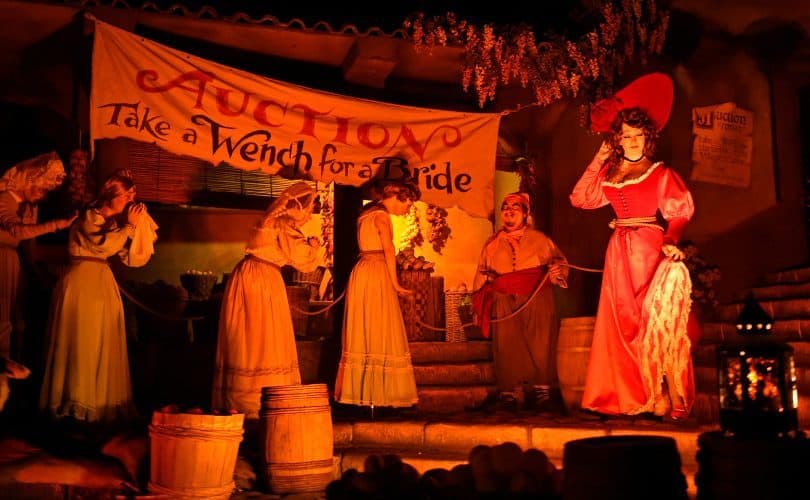 Disneyland is preparing to nix a scene on the Pirates of Caribbean ride where captive, tied-up women are auctioned off as brides. The park says the ride will be shut down temporarily on April 23 to make the changes.

The ride currently takes visitors on small boats past a scene of unhappy women waiting to be sold under a large banner that reads “Auction: Take a wench for a bride.” The new scene will showcase a female pirate overseeing the auction of local loot.

The Mercury Times reports the public has had mixed reactions to the news:

“Disneyland needs to reflect the times, and it seems to me this is the time to change it,” blogger Dusty Sage of the Micechat.com forum said. “It’s uncomfortable even for me to see women being sold into bondage and human trafficking. I can’t even imagine what little girls think about this.

It seems to me that Disney was just ahead of the curve on all this ‘Me Too’ movement, because they announced this change last summer.”

Not everyone agrees with the change, though, including unofficial Disneyland historian and author David Koenig, who said “this one really irks me — but does not surprise me.”

“The bride auction is being removed because Disney is lily-livered,” Koenig said. “No one is really offended by animatronic pirates acting lusty. It’s in-character silliness. I don’t advocate gunplay, thievery, alcoholism or sexism, but I’m still able to enjoy a show in which pirates behave like pirates.”

This is the second time the Pirates of Caribbean ride has been updated to make it more in tune with current societal values. In 1997 the park changed a scene where lusty pirates chased after women with the implication that they would be assaulted.

Despite outcry from some who want to see the ride stay the same, Sage points out that “They are pirates, and pirates rape and pillage and plunder, but how much of that is appropriate for a theme park ride? The temptation is to be afraid of any change and I love tradition, but this is a case where they have to change.”

Right thing to do.

So I should bloody think! “No one finds it offensive”? Well yes, I do, for one. Insidious demoralisation of women. It has no place in a 21st century entertainment park.

The worst way of dealing with the unacceptable practices of the past or present is to pretend they never happened. Almost every classic narrative worth reading or viewing, whether factual or fictional, has at its root some moral dilemma which we are obliged to examine as children, and continue to examine into adulthood. Piracy in modern times is seen for what it is, an inhumane and exploitative exercise; is there any reason to believe that in historic times it was less so?

Ah what does “nix” mean in the world generally? When I started the article I thought it meant “create” or “start”. The article makes it plain it means “close down” or the remove the scene.
As the article is addressed to the rest of the world as well as just the States, is not preferable to avoid expressions in US English that don’t mean the same ir understood the same way / not is such usage in the rest of the world?

The should have white males on auction too ! Unfortunately, there are more slaves in the world today than ever before, some of them are government sanctioned.

Thank goodness it is going. No-one needs to see historically accurate scenes of this kind – would they do an execution or torture? Pirates did that too.