Did UK Company Hire Former Child Soldiers? - FreedomUnited.org
This website uses cookies to improve your experience. We'll assume you're ok with this, but you can opt-out if you wish.Accept Read More
Skip to content
Back to Global News 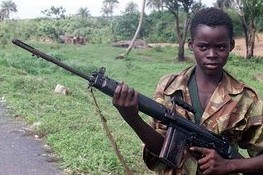 A UK company, Aegis Defence Services, might have hired former child soldiers from Sierra Leona to work in Iraq in order to save money, but they failed to check whether they were hiring former child fighters…

A past senior director at the company, James Ellery, explained that the British firm recruited them from Sierra Leona, because it was cheaper than hiring Europeans.  They did not, however, check to see if they had once been child fighters.

Contractors, he said, had a “duty” to recruit from countries such as Sierra Leone, “where there’s high unemployment and a decent workforce”, in order to reduce costs for the US presence in Iraq.  He worked for Aegis Defence Services between 2005 and 2015. “You probably would have a better force if you recruited entirely from the Midlands of England. But it can’t be afforded. So you go from the Midlands of England to Nepalese etc etc, Asians, and then at some point you say, I’m afraid all we can afford now is Africans.” Ellery was once a brigadier in the British army.

Aegis Defence Services, a UK company, which is chaired by Sir Nicholas Soames, a Tory MP and Winston Churchill’s grandson, had a series of contracts worth hundreds of millions of dollars to provide guards to protect US military bases in Iraq from 2004 onwards. From 2011 the company broadened its recruitment to take in African countries, having previously employed people from the UK, the US and Nepal. Contract documents say that the soldiers from Sierra Leone were paid $16 (£11) a day.

A documentary will be broadcast tomorrow in Denmark titled, The Child Soldier’s New Job.  It claims that the estimated 2,500 Sierra Leonean personnel that were hired by Aegis and other companies included former child fighters.

The film-maker, Mads Ellesoe talks about the privatization of war: “When war gets outsourced, then the companies tries to find the cheapest soldiers globally. Turns out that that is former child soldiers from Sierra Leone. I think it is important that we in the west are aware of the consequences of the privatisation of war.”