Deport or Support? What Will Home Secretary Priti Patel Do? - FreedomUnited.org
This website uses cookies to improve your experience. We'll assume you're ok with this, but you can opt-out if you wish.Accept Read More
Skip to content
Back to Global News 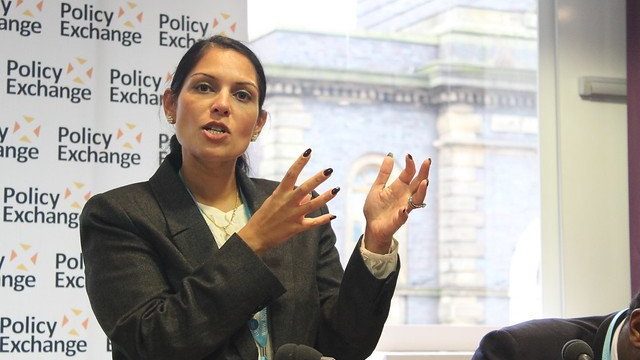 Deport or Support? What Will Home Secretary Priti Patel Do?

The UK has its new Home Office Secretary, Priti Patel. And many are closely eyeing how she plans to help survivors of modern slavery.

With shocking reports emerging in the past few months, documenting how the Home Office locked up hundreds of victims of human trafficking in immigration detention, will Priti Patel help reverse course on this injustice?

This week, a joint report from Focus on Labour Exploitation, Ashiana Sheffield, Latin American Women’s Rights Service and Bail for Immigration Detainees identified 143 trafficking victims put in detention, even after the authorities identified them as victims of exploitation.

Take Nadine*, identified by charity Ashiana Sheffield: she was trafficked to the UK and then arrested and detained for immigration offences. Her victimisation wasn’t picked up because officials failed to ask key questions that would have uncovered her abuse. She was removed from the UK, only to be re-trafficked back here. Thankfully, with Ashiana Sheffield’s help, Nadine has now received support.

While Nadine’s victimisation was missed by authorities, the case of Dan*, identified by Bail for Immigration Detainees, shows that even if someone’s possible victimisation has already been noted, they can still be locked up. Dan had already been referred into the UK’s national framework for identifying and supporting victims of modern slavery when, two months later, he was sent to a detention centre.

Sadly, these instances are far from anomalous. They are the product of a deep-seated conflict of interest: the Home Office is responsible for immigration enforcement and for tackling modern slavery. On the ground, this means a continual choice is being made: is this person going to be treated as an immigration offender or as a possible victim of slavery? Deport or support?

We know the trend has been in favor of detaining foreign victims. In 2018 the Home Office maintained detention in 77.6% of cases where someone was identified as vulnerable.

So will Priti Patel listen to the voices of the Joint Committee on Human Rights and the Home Affairs Select Committee, both of which have pointed out how the system fails vulnerable individuals? Will she make a bold commitment and promise that no victim of trafficking will ever be detained under immigration powers in the UK?

“These are clear red lines for any government and nation that wants to be a world leader on supporting victims of modern slavery and tackling its perpetrators,” writes Emily Kenway in The Independent.

“Failing to introduce these changes will provide uncomfortable answers to questions about the nature of British society today: are we OK with locking up victims of exploitation because of their immigration status?”