Cindy McCain Apologizes for Misreporting Trafficking - FreedomUnited.org
This website uses cookies to improve your experience. We'll assume you're ok with this, but you can opt-out if you wish.Accept Read More
Skip to content
Back to Global News 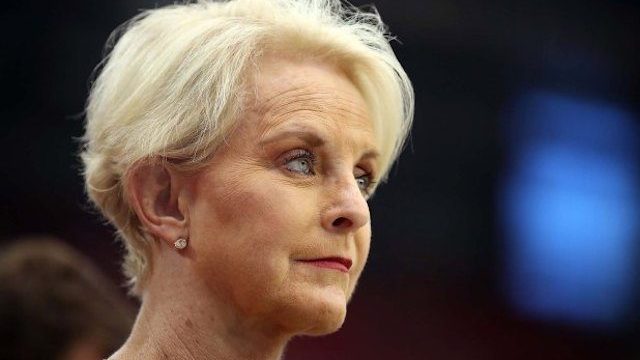 Cindy McCain is apologizing for reporting an innocent woman and child to Arizona police after suspecting that it was a case of human trafficking.

Last week McCain took to the airwaves this week on KTAR News 92.3 FM, when she first told the story of how she intervened at Sky Harbor International Airport in Phoenix.

“I spotted — it looked odd — it was a woman of a different ethnicity than the child, this little toddler she had,” she said.

“Something didn’t click with me. I tell people to trust your gut. I went over to the police and told them what I thought. They went over and questioned her and, by God, she was trafficking that kid.”

Yet it has now emerged that there was no crime with the Phoenix Police Department saying the woman and child were innocent.

As the New York Times reports, this case is prompting many to question the efficacy of “see something, say something”:

In a statement on Thursday, a police spokesman said that officers assigned to the airport checked on a child at the request of Ms. McCain on Jan. 30, but found that “there was no evidence of criminal conduct or child endangerment.”

In a statement on Thursday, the McCain Institute for International Leadership, a Washington-based think tank that was inspired by the McCain family and for which Ms. McCain serves on the human trafficking advisory council, said: “When Cindy reported what she thought was an incident of trafficking at the airport she was only thinking about the possible ramifications of a criminal act.”

The institute added: “Her hyper sensitivity to looking for trafficking in this instance was not correct, but it should in no way distract from the broader importance that we all have a responsibility to be aware of this kind of crime.”

Preshuslee Thompson of the Kirwan Institute for the Study of Race and Ethnicity at Ohio State University pointed out that implicit bias may also be at play here, especially because McCain cited ethnicity as the reason red flags went up in her mind.

McCain herself has an adopted daughter from Bangladesh, making it even more perplexing that she reported another mother and child whose races were different.

Thompson suggests that when you see something suspicious to take a step back and question why you feel this way: “Is it because of a person’s race? What biases do I have? What other information do I need to make a decision?”

“You have to have that moment of self-reflection,” she said. “Really ask yourself: ‘Why am I feeling this way?’”