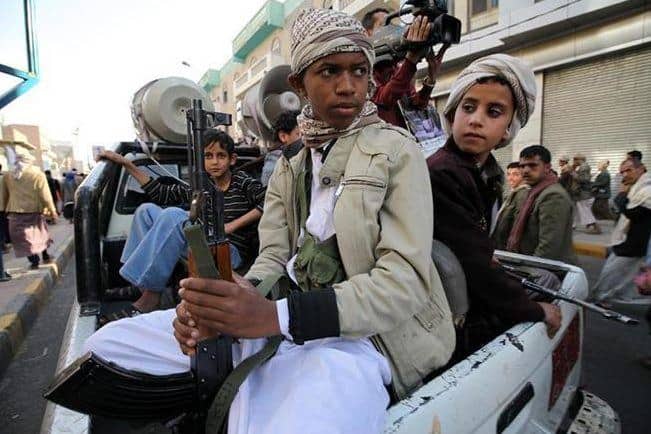 Child soldiers now make up 1/3 of the fighters in Yeman.  Houthi forces, government and pro-government forces and extremist armed groups have all used child soldiers…

This past May, pro-government and the opposing Houthi agreed to exchange half of all prisoners before the holy month of Ramadan.  It was part of the peace talks.

Bill Van Esveld, senior children’s rights researcher at Human Rights Watch: “All parties should ensure that children, who never should have been on the battlefield in the first place, are released during this prisoner exchange and demobilized. Both sides should stop recruiting and placing children in danger and return them immediately to their families.”  More than 900 children were killed and 1,300 were injured in 2015.

On May 30, the United Nations special envoy to Yemen, Ismail Ould Cheikh Ahmed, announced on Twitter that he had received lists of prisoners from both sides, later reported to include 2,630 on the government side and 3,760 on the Houthi side. However, the sides differed as to the number of prisoners to be released, with Houthis saying 1,000 and government sources saying all detainees, according to reports citing sources close to the negotiations. Separately, Houthi and anti-Houthi forces in Taiz exchanged 35 prisoners on June 2.

A Saudi Arabia-led coalition, supported by the United States and the United Kingdom, waged an aerial and ground campaign against Houthi forces and forces loyal to former President Ali Abdullah Saleh.

Human Rights Watch documented that parties in the conflict detained children suspected of loyalty to enemy forces, and they have abused prisoners and held them in poor conditions.

Van Esveld said, “The parties to the conflict in Yemen could send a message that they want to do what’s right by releasing captured children before Ramadan and implementing long-broken promises to end the use of child soldiers.”