Burning Anti-Slavery Placards Left at Colorado Campaigner's Home - FreedomUnited.org
This website uses cookies to improve your experience. We'll assume you're ok with this, but you can opt-out if you wish.Accept Read More
Skip to content
Back to Global News 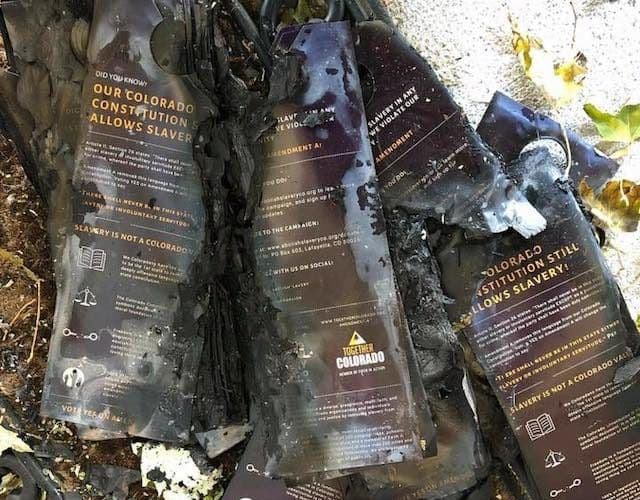 “It’s the equivalent of an 1820s cross burning on my front lawn.”

Emery, the lead organizer for the campaign to remove slavery from Colorado’s state constitution, found a pile of about 25 burning campaign doorknob placards on his front porch on Monday in an apparent attempt to intimidate him.

Emery was not home at the time, but his wife went outside in the afternoon to rake leaves when she spotted the fire at their front door.

Colorado Amendment A, which voters are due to vote on today, would remove language from Colorado’s constitution that currently allows slavery and involuntary servitude as punishment for crimes.

Emery had no suspect information on whoever left the burning material. No one witnessed the incident as far as he knows. At about 5 p.m. Emery was waiting for Denver police to arrive so he could fill out a police report.

“Politicians say this is OK,” Emery said. “They’ve made this acceptable behavior. This is right out of the (KKK) clan playbook…it’s uncalled for.”

The placard burning only further legitimizes Amendment A and what Emery and others have been working toward, he said.

No one has claimed responsibility for the fire yet.

“This shows me how symbolic this measure is and how it pushes people.”