Brothers Homeless Waiting to Testify Against Traffickers - FreedomUnited.org
This website uses cookies to improve your experience. We'll assume you're ok with this, but you can opt-out if you wish.Accept Read More
Skip to content
Back to Global News 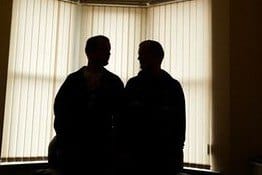 Two brothers from Lithuania were at first relieved that their nightmare of living under forced labor had ended.  But after they were freed by authorities, Eugaras and Edvinas found themselves living on the streets while they waited for months to testify as key witnesses in a trial against their perpetrators…

They said they spent most of their time walking. They might go into a library if it rained or they would hang out on benches and under bridges, but at night most of their time was spent walking.  Edgaras said, “We were meeting people who had lived on the streets for five, 10 years, people drinking; we were frightened that would happen to us.”

The brothers are 29-year-old twins who were lured to the UK from Lithuania in 2013.  Their traffickers promised them good jobs, decent accommodations, and the essentials they would need while working their new positions.

After their rescue from forced labor, the two were passed to the UK’s National Referral Mechanism that was to provide victim support to them.  Lawyers for the brothers, however, say that changes had occurred in the government that restricted EU migrants from getting benefits or from receiving any of the long term help they needed.  Finally, they requested a review in the high court, and they are now awaiting a ruling in April.

Their case could set a precedent for others going through similar ordeals.

Eugaras expained:  “We are hopeful now but tired of waiting. We are 100% family, just two of us.”  However, he expressed some concern regarding the ruling, “We are worried that we might end up back on the streets again. It was like being a dog on the street.”

To read the entire article about Eugaras and Edvinas, click on the link below.