Biram Abeid Accepts UN Human Rights Prize - FreedomUnited.org
This website uses cookies to improve your experience. We'll assume you're ok with this, but you can opt-out if you wish.Accept Read More
Skip to content
Back to Global News 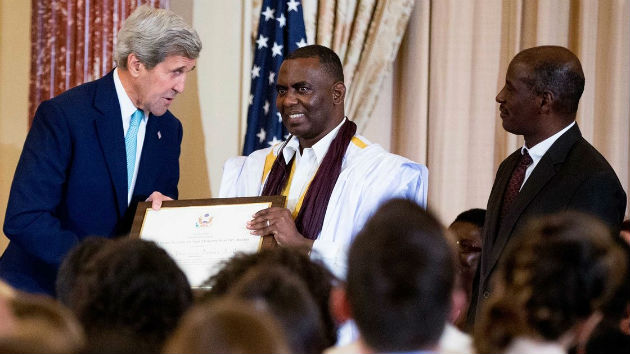 Biram Dah Abeid is a human rights anti-slavery activist from Mauritania who has led his country’s anti-slavery Movement. He will soon arrive in the United States to accept the United Nations Human Rights Prize for his work in the Resurgence of the Abolitionist Movement.  For the last 18 eighteen months, Biram and another activist have been imprisoned in Mauritania.  They were convicted of protests without official authorization and for belonging to an unauthorized organization. Biram had also been put in prison in the past, usually for a few months each time, for these acts of protest…however, this was his longest sentence.

In his country, the Beydanes, a minority Arab-Berber ethnic group, dominate politics and the economy, and have for centuries used a black ethnic population called the Haratin as slaves. Mauritania in 1981, was the final country on the globe to abolish slavery; however, it continues although the government denies it. Abeid is a descendant of slaves, and in 2008, he established the Initiative for the Resurgence of the Abolitionist Movement (known as ira). Abeid has attacked the government’s practice of seizing land that the Haratin have lived and worked on.  That land was then given to local élites and foreign investors. The large population of Afro-Mauritanians, black Muslims who faced ethnic cleansing and deportation in the 1980s and ’90s, has been just as vulnerable as the Haratin.

In November, 2014, Abeid, Ramdhane, and several other activists conducted a caravan tour through the fertile southern valley near the Senegal River, stopping in communities to talk with Haratin and Afro-Mauritanian farmers about their land rights. “The government came and gave away all their lands,” Ramdhane said. “They are now forced to work for these new landowners just to get food—we call that land slavery.” The activists fear that blacks are vulnerable to being enslaved or to entering into serf-like relations as new owners take possession of their lands, and they advised the farmers to work hard and to protest until laws are passed to protect them. Abeid, a devout Muslim, has long incorporated religious arguments into his protests against slavery. Islamic law, he said, argues that land belong to those who work it. He wants black farmers to “push the power to understand that they are not implementing either Islamic or Mauritanian law.”

When the caravan reached Rosso, the local police confronted the activists and arrested a number of them. Abeid and Ramdhane were among those put in prison.  In May, Mauritania’s Supreme Court overturned their two-year sentences, reversing an appeals-court decision, from August, 2015, that had upheld them. It was a meaningful moment for the activists. That same week, two slave owners were each sentenced to five years in prison and were ordered to pay compensation to their victims, in the country’s second-ever slavery prosecution.

The State Department, after their release, invited them to the U.S. to be recognized for their abolitionist efforts. John Kerry awarded them one of this year’s Trafficking in Persons (TIP) Report Heroes Awards, in Washington, D.C. Then for the next two months, they met with supporters and officials at the State Department.