Anne Frank Award for Fighting Human Trafficking - FreedomUnited.org
This website uses cookies to improve your experience. We'll assume you're ok with this, but you can opt-out if you wish.Accept Read More
Skip to content
Back to Global News 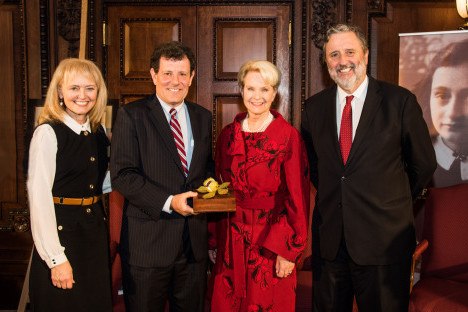 The award ceremony took place February 25 in the Members Room of the Library of Congress as part of the Royal Netherlands Embassy’s Holland on the Hill initiative. Human trafficking knows no boundaries, be it geographical, age or gender. The International Labor Organization states there are more than 4.5 million people trapped in forced sexual exploitation around the world. In the United States alone, 20 percent of the 11,800 runaways reported last year were likely sex trafficking victims, according to the National Center for Missing and Exploited Children.

Kristof has been a journalist with the New York Times since 1984 and he has used the power of the written word to raise awareness for human trafficking victims by linking human trafficking to modern slavery. He emphasises punishing those responsible and calls for people to reach out to help the victims.   “A Path Appears” is his PBS documentary exposes the effects of trafficking and highlights the role that poverty plays.  Upon accepting the award, he said, “I’m thrilled by the award, and delighted that it shines a powerful light on issues like sex trafficking. Human trafficking is one of those problems that thrives when it’s ignored, and the first step to addressing it is simply to rally attention–which the Anne Frank Award does.”

Cindy McCain co-chairs the McCain Institute’s Human Trafficking Advisory Council and has been committed to education on trafficking.  She has advocated for the cause, lobbying Congress to adopt laws that prosecuted offenders.  She said, “I am deeply honored to be receiving this award and to share the stage with Nick Kristof. It is so important that we continue to raise awareness for the fight against human trafficking. Even one child that is having a human trafficking experience is too many.”