Ugly Face of Trafficking in India - FreedomUnited.org
This website uses cookies to improve your experience. We'll assume you're ok with this, but you can opt-out if you wish.Accept Read More
Skip to content
Back to Global News 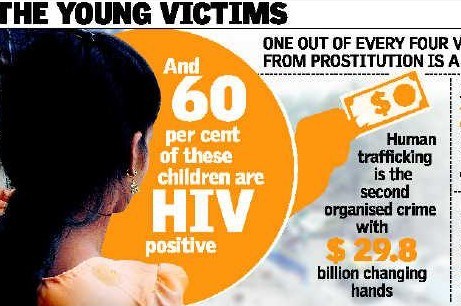 Ugly Face of Trafficking in India

In India, minor girls are being exposed to the ugly face of human trafficking. Increasingly, younger and younger girls are being pushed into sex trade because men fear the threat of HIV/AIDS during intercourse…

Prajawala’s project coordinator says, “A disturbing fact is that the age of children is progressively declining to meet the demand for younger prostitutes. One out of every four victims rescued from prostitution is a child, and 60 per cent of these children are HIV positive.” A recent campaign against human trafficking was held to raise awareness in Telangana, Andhra Pradesh and Odisha.

As the caravan christened ‘Suraksha’, flagged off by Governor E.S.L. Narasimhan in Hyderabad on January 9, meandered through the dusty lanes of Ongole, Podili, Markapur, Addanki and Chirala mandals in Prakasam district, Mr. Chandraiah explained that: “Andhra Pradesh is one of the largest suppliers of women and children for commercial sexual exploitation. Economic hardships coupled with the prevailing low status of women in society, and changing attitudes towards sex and morality create conducive conditions for this modern-day form of slavery,” he adds.  Human trafficking is the second organised crime with $29.8 billion changing hands. As many as 24 women land in red light areas each day, while a child goes missing every two minutes in the country,” he explains, after screening documentaries on heart-rending stories of women and children victims of commercial sexual exploitation.

Anjali (name changed) didn’t think life held any promise after her parents died.  She ended up in the Vijayawada railway station and met a stranger who told her he would set up a job in Mumbai for her.  She ended up in Mumbai’s red light district, but was eventually rescued by Prajawala.

Another girl named Shanthi (name also changed) fell into similar circumstances.  She was a young under-aged student who fell in love with a motorcycle mechanic. She argued with her parents and finally ran away and married him.  The two went to Hyderabad where he sold her to a woman for Rs. 50,000.  That woman forced her into sex work.

Poverty certainly contributed to their fate, but some girls who come from very nice–even extravagant lifestyles–experience human trafficking’s ugly face by seeking good jobs in unfamiliar cities.  Mr. Chandraiah thinks there is a need for community vigilante groups to help prevent trafficking.