Ambassador Shorter Visits Insaaf - FreedomUnited.org
This website uses cookies to improve your experience. We'll assume you're ok with this, but you can opt-out if you wish.Accept Read More
Skip to content
Back to Global News 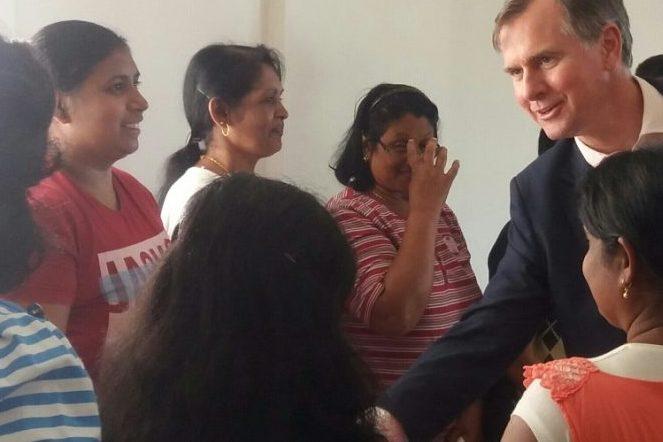 A press release by the British Embassy in Beirut said: “Meet Leena, Lebanese anti-slavery campaigner, and Sarah, Beirut librarian from India. Two women with different stories but one common ideal: fair treatment. Both are concerned by the situation of migrant domestic workers in Lebanon – particularly those known as the “shut-in maids,” who are rarely or never allowed to leave their employers’ homes.  Ten years ago, a friend asked Sarah to translate for a young Indian domestic worker summoned to court. Now she runs Insaaf (meaning Justice or Equity), a safe space for migrant domestic workers in the heart of Dora, where her dedicated colleagues provide much needed services such as orientation, language courses, legal counsel and social activities.

These services caught Leena’s attention.  After the research she conducted: “Employing a domestic worker in Lebanon can be a timely and costly process. It can be frustrating, uncomfortable, and integrating a new person into your household may be challenging due to language and cultural barriers.”

From this simple idea came Leena’s big idea for a social enterprise: EQUIP, a unique new approach which will support agencies, employers and workers in equal measure to help build professional and sustainable working relationships. Leena plans to offer key services like skype introductions and airport welcomes, to make both sides more comfortable; first aid courses, to give employers more confidence in their workers; and, crucially, a mediation service to help resolve problem cases.
Together, Leena and Sarah welcomed British Ambassador Hugo Shorter to Insaaf to mark International Domestic Worker’s Day (June 16th) along with workers from around the world. Amidst the cake and the selfies, it was a chance to hear about their hopes for the future.

Ambassador Shorter says, “Domestic workers perform a respectable and valued job, but they don’t enjoy the same protections at work as other employees – and the rights they do have are particularly open to abuse because of their situation. The women I’ve met today deserve respect, adequate rest and the chance to see friends and family, just like the rest of us – the right to live in a Fair Home. This is an issue for which the Embassy has long been an advocate, and I’m pleased that after granting Leena a Chevening scholarship to the UK, we were able to fund her initial research. We look forward to supporting EQUIP as it moves forward.”

To read the entire article about Ambassador Shorter, click on the link below.