African Migrants Bought and Sold Across Libya's Prisons - FreedomUnited.org
This website uses cookies to improve your experience. We'll assume you're ok with this, but you can opt-out if you wish.Accept Read More
Skip to content
Back to Global News 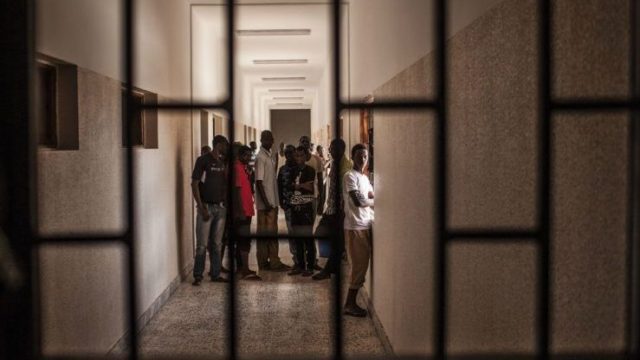 When Mohammed slaved away on his owner’s tomato field in Libya, he would often remember the days he was free.

From Niger, Mohammad fled his home when Boko Haram militants raided the area. He paid smugglers to take him across North Africa and into Europe, but upon arrival in Libya he and other migrants were captured by a Libyan militia.

From then he spent three years thrown into prison, held for ransom, and bought and sold into bonded labor.

While Mohammad says he has heard of the now infamous slave auctions in Libya, he was bought and sold directly from the detention centers holding him and other African migrants.

NPR spoke to five men from Gambia, Nigeria, and Senegal who are now being helped by the Red Crescent:

They didn’t witness the secret slave auctions reported by CNN, although they say they have heard of those. Instead, they describe Libya’s detention centers — a network of prisons, some of them sanctioned by the state as part of an effort to combat illegal immigration — as being the very places where migrants are “bought” and “sold.”

Boubaker Nassou, a 30-year-old from Gambia, describes the detention center where he was held as a “slave market” and as the “prison where they sell people.”

Like Mohammed, from Niger, the smugglers’ car that Nassou rode in was detained by a militia once he crossed into Libya. The migrants were bundled into another vehicle, and he says they were taken “straight to the prison where they sell people.”

Amnesty International published a report in December  of last year on the problem, estimating there are over 20,000 refugees and migrants being held in official detention centers that are technically run by the Libyan Interior Ministry’s Department of Combating Illegal Migration. Libyan authorities say are they investigating the abuses, but migrants still report that exploitation is widespread.

For Mohammad, life is still hard. He’s now working on an olive farm in Tunisia. “Here the work is little, and the money is bad. But at least there’s safety, and that’s what I want — to live my life in a safe place,” he said.