2 Charged with Trafficking after 26 Nigerian Women Found Dead - FreedomUnited.org
This website uses cookies to improve your experience. We'll assume you're ok with this, but you can opt-out if you wish.Accept Read More
Skip to content
Back to Global News 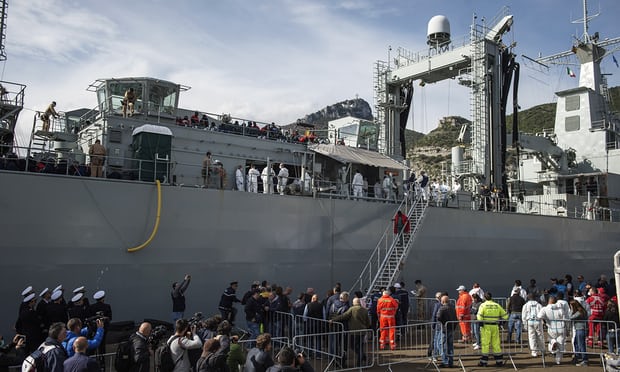 Two men have been charged in Italy with human trafficking over 150 people after 26 Nigerian women were found dead while attempting to cross the Mediterranean. Suspicions have been raised that they were being trafficked for sexual exploitation and that they may have been murdered. The Guardian reports:

The bodies of the women were brought to the southern Italian port of Salerno by the Spanish ship Cantabria on Sunday, and prosecutors opened an investigation over suspicions that the women, some as young as 14, may have been abused and killed.

The bodies were recovered by Cantabria, which works as part of the EU’s Sophia anti-trafficking operation, from two separate shipwrecks – 23 from one and three from the other. Fifty-three people are believed to be missing.

The men arrested have been named as Al Mabrouc Wisam Harar, from Libya, and Egyptian Mohamed Ali Al Bouzid.

Autopsies are due to happen later this week.

In recent years, many Nigerian women have been trafficked to Italy, often forced to work in prostitution. Marco Rotunno, an Italy spokesman for the UN refugee agency (UNHCR), added that 90% of migrant women arrive with bruises and other signs of abuse. “It’s very rare to find a woman who hasn’t been abused, only in exceptional cases, maybe when they are travelling with their husband. But also women travelling alone with their children have been abused,” he said.

Geez! To only be able to travel safely to Italy if you’re with your husband… How can this happen? The whole situation is outrageous. Women (and their children, if they have any) should be provided with the necessary security measures for them to travel just as safely as men.
I’m happy those men have been apprehended, but there’s obviously a lot more to do. Too many guilty are still rampant!