Fired for Having Cancer: Our Exclusive Interview with Baby Jane Allas and Jessica Cutrera
This website uses cookies to improve your experience. We'll assume you're ok with this, but you can opt-out if you wish.Accept Read More
Skip to content
Back to Global News 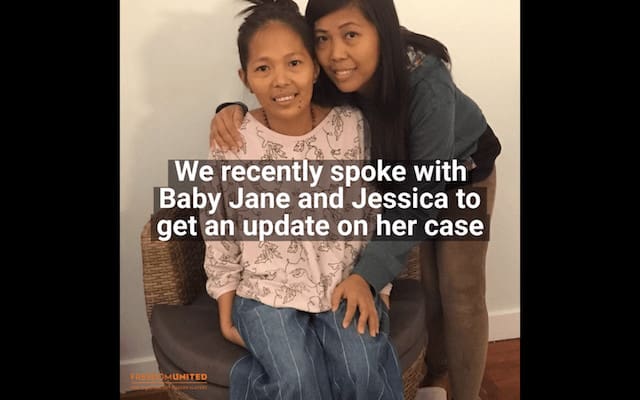 Fired for Having Cancer: Our Exclusive Interview with Baby Jane Allas and Jessica Cutrera

Imagine being fired for having cancer.

The single mother came to Hong Kong to be a domestic worker in 2017, hoping to support her five children and mother back in the Philippines. Yet her employer acted like Baby Jane was her property, treating her like a servant she owned.

Baby Jane was made to sleep in a cabinet under the stairs and was not given a weekly day off a required by Hong Kong law. On top of this, her employed rationed Baby Jane’s food, going so far as to count the individual slices of bread she could eat.

At the end of 2018, Baby Jane fell ill. She had lost 16 kilograms due to lack of proper food and illness. Still, her employer wouldn’t give her time off to see a doctor.

When Baby Jane was finally able to see a doctor on January 20, 2019 she was given devastating news — she had advanced stage 3 cervical cancer. She was given recommended sick leave to undergo cancer treatment, but her employer had other ideas.

Her employer handed Baby Jane a termination slip that read “Reason for termination (if any): Diagnosed with cervical cancer.”

It meant that Baby Jane instantly lost her health insurance.

Baby Jane refused to sign the release letter, prompting her employer to confiscate Baby Jane’s copy of her contract, medical receipts, and referral letter from the hospital.

Fortunately, Jessica Cutrera, who employs Baby Jane’s sister as a domestic worker, heard about her situation and decided to help. She launched an online fundraiser for Baby Jane’s cancer treatment, which has raised over $837,010 HKD ($106,693 USD) to date and brought much-needed attention to domestic slavery and exploitation in Hong Kong.

We recently spoke with Baby Jane and Jessica to get an update on how treatment is going and the status of her legal claims, as well as advice for people who want to help.

How is Baby Jane Allas doing now? What is her current prognosis?

She’s going for chemotherapy 1x per week and radiotherapy 5x per week. Her cancer is an aggressive adenocarcinoma, stage 3B. 5 year survival rate is around 50% so this urgent and continuous treatment was critical to giving her the best chance of survival. This is what made her discrimination and termination as a result of her illness so devastating. The time it would take for her to go home to Philippines and get enrolled in care (far from home as her island doesn’t have any facilities) would likely have been fatal, if she could get the care at all.

It’s too early to say prognosis. She needs to finish the current course of treatment over the next few weeks and then her doctors will decide what to do next.

What has the reaction been to Baby Jane’s case among employers of domestic workers in Hong Kong?

Most employers have been horrified by how poorly she was treated. We’ve received extensive support from many individuals and organizations and it’s been really uplifting for her to see that most people do not condone this kind of abusive behavior.

But some employers have expressed support for Baby Jane’s employer, mainly due to feeling that an employer shouldn’t have to be burdened with an employee’s illness or inability to work. Or how inconvenient it is to have someone sick living in your home or who has medical bills you have to pay. Those kinds of responses highlight exactly why there is a need for much better employer education in Hong Kong.

Baby Jane’s rights under the law are quite clear. But still many people who hire domestic workers do not think of themselves as employers with obligations under the employment ordinance. They feel entitled to have help. It’s a common practice and they don’t consider the rights of the people they hire. The reality is that people who do not want to accept the risks and inconvenience of a domestic worker who becomes ill (or is injured or pregnant) should not be allowed to hire domestic workers.

You mentioned that Baby Jane and her sister are working to ensure that other migrant domestic workers in Hong Kong get pap smears to screen for cervical cancer. Could you explain more about their work?

Baby Jane and her sister had never had a pap smear. Neither had any of their friends. They both understand now that Baby Jane’s condition could have been easily treated and cured if caught much earlier.

Even for helpers who understand the issue and who have employers who are willing to pay for preventative care, it’s a tough subject to bring up and most helpers don’t know how to have the conversation. Our first event is this week. We are having a pizza party for helpers in our neighborhood to come and learn about how to use the government clinic system to book a pap smear and what it is and why you should do it (combined with a presentation of financial wellness from Enrich).

What do you think can be done to prevent other cases like this from happening in the future?

What can people do to support Baby Jane at this point? Does she have a message for those supporting her case?

She’s very grateful for all of the support. At the beginning I don’t think she expected anyone would care about her case. She told her sister she just wanted to go home and die. But now she has hope and she has the will to fight her disease and her case. She’s very thankful to everyone who has wished her well and supported her.

If you would like to contribute to Baby Jane’s cancer treatment: here is the online fundraiser

If you’re in Hong Kong: contact your legislative council members to tell them you care about this case and upholding domestic workers’ rights in the city.

If you’re not in Hong Kong: sign our petition to push your country to ratify the Domestic Work Convention, or C189. By signing, your government can enshrine fundamental labor and human rights for domestic workers to protect them from domestic slavery.

How easy or difficult is it for domestic workers to join to form a trade union? Joining with other workers to fight for their rights is essential.

Thé chemotherapy Is a worse thing, radiotherapy(?), It I Don t. know. May ve a healer And a Fast for forthy days would be better. I am glad I. can join petitions on ONE because local inhabitants in our Brno s. region are told: “…. And it Will ve worse” but I am told with you: “Make thé world a better place”. JARKRY
“No lauh Is not thé World War III. what we are living now. JARKRY

Is incredible sad to heard such terrible treatment of a human and that such abuse is going unpunished. The Hong Kong Law is incredible inadeguate. Note that China is the political and power there now and should act in defence of the poor worker or communist is only for the rich now? I hope and pray that she get all she need for assistance and please put the agency and employer name on FB & Twitter that may help other not to use or accept to work for such criminal.

I’m a Chinese, and I’m very sad to haer such a terrible things that happened in China,Although I am not familiar with Hong Kong but in recent years, the Chinese government has been committed to providing workers with a better working environment and more legal protection. Employers like this are bound to be punished by law.

Thanks Dan, probably you are not getting update from the China media that is control by the only party in power. Honk Kong is protesting against China regime that had arrested many of them that fight for freedom. What you said can be good but I doubt that a regime that forced abortion, harvest human organ for sale of dissident, religious people on hard prison is really doing what they said.
Shalom

When will humanity learn humility 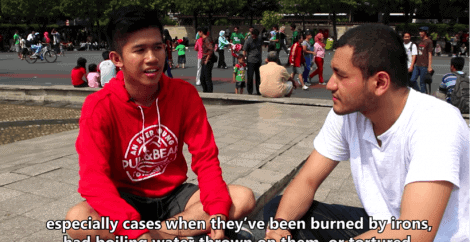