Calling on Universities to divest from prison slavery - FreedomUnited.org
This website uses cookies to improve your experience. We'll assume you're ok with this, but you can opt-out if you wish.Accept Read More
Skip to content
Back to Global News 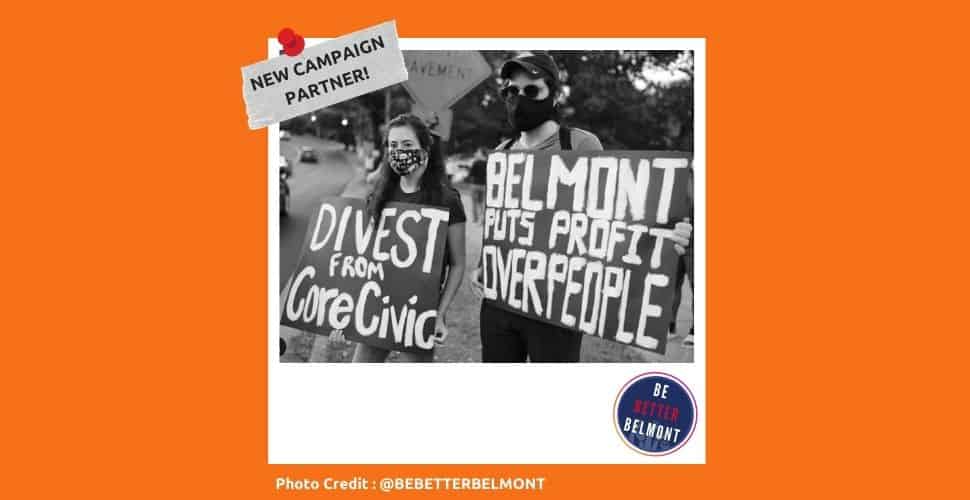 Calling on Universities to divest from prison slavery

You probably know that the United States did not abolish slavery with the 13th Amendment.

Involuntary servitude remains legal as punishment for a crime. However, even those who are not convicted of crimes – including immigrant detainees – have allegedly been subjected to forced labor behind bars.

The U.S. public and private prison and immigration detention industry continue to exploit profit from inmates, particularly people from black and brown communities. They are, in effect, trafficked into the prison industrial complex.

That is why we are partnering with Be Better Belmont, a community organization initiative started by a coalition of students, alumni, and Belmont University community members specifically to call on colleges that are divesting from the private prison industry.

We are joining their fight to dismantle the systemic racism that built the United States’ dependence on the prison industrial complex.

Together we are calling on Belmont University to fully divest from CoreCivic, one of the largest private prison companies, and remove members of their Board of Trustees that have ties to the prison industrial complex. CoreCivic, headquartered in Tennessee, is facing accusations of prison forced labor, and we have been campaigning for change at CoreCivic for 3 years now.

Universities oftentimes pride themselves on being safe spaces for students and aim to be inclusive to the black and the brown community, however, this is at odds with continuing to support programs and institutions that exploit people of color.

The industrial prison complex is linked back to historical slavery, modernized to traffic low-income communities for free labor through the 13th Amendment’s provision to allow prison as use of punishment.

We are asking all universities that have ties directly and indirectly with prison labor to divest and cut their ties to meet their mission statements of inclusivity.

Take a stand with us as we seek to bring an end to prison slavery in the United States.