Stop detaining survivors - MP action - FreedomUnited.org
This website uses cookies to improve your experience. We'll assume you're ok with this, but you can opt-out if you wish.Accept Read More
Skip to content

Ask your MP to ditch detention for modern slavery survivors 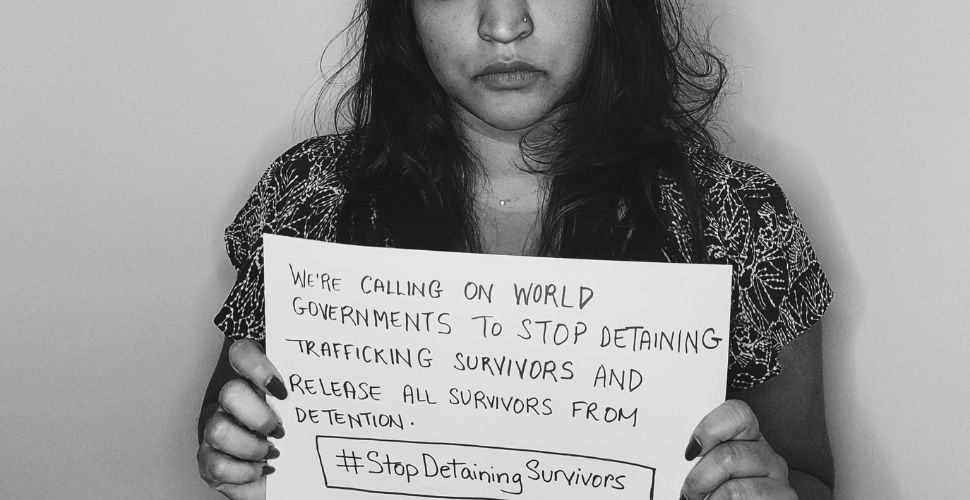 Alarmingly, survivors of modern slavery and trafficking are being detained in prison-like settings around the world. Their offense? Breaching immigration rules, often as a result of their exploitation.

In countries such as the U.K., U.S. and Australia,1 there’s not even a time limit on how long a survivor a can be held in immigration detention causing “immeasurable and unnecessary harm.”2

We’re urging governments to stop detaining survivors for not having secure immigration status, and meet international standards designed to protect survivors from further trauma and revictimization.

Under the Palermo Protocol on Trafficking, the non-punishment provision3 urges states to ensure survivors are not held in detention nor prosecuted for crimes they were forced to commit as a result of their exploitation.

Crossing a border, albeit without the right documents, doesn’t inherently make someone a risk to society. In fact, immigration rules are often what makes them vulnerable to exploitation – it allows traffickers to use the threat of detention to keep victims from seeking help.4

There is no justification for putting trafficking survivors behind bars when they have already been subject to a loss of liberty and severe exploitation. Yet, this is what is routinely happening to survivors.

The U.S. Trafficking in Persons report 20205 outlined a disturbing global trend. Detention of trafficking victims for breaching immigration rules was recorded as an area for improvement in countries such as Jordan, Lebanon, the U.S., Mexico, the U.K. and others. In January 2021, Mexican authorities detained a Venezuelan victim of trafficking for sexual exploitation, without specialist support, for almost a month in a migrant detention center despite the country’s refugee agency being aware of the woman’s experience of trafficking.6

Detention of trafficking survivors is inhumane and risks seriously exacerbating survivors’ “physical, psychological and social recovery, it may also result in accumulative trauma, suicidal behaviour and post-traumatic stress disorder.”7 The UN Special Rapporteur on trafficking in persons has explicitly called for potential and confirmed victims of trafficking to be removed from prison-like settings.8

Law enforcement has also expressed doubts on the necessity of immigration detention in the modern slavery context. Phil Brewer, former head of the U.K.’s Metropolitan Police Service’s Modern Slavery and Kidnap Unit, says “You do start questioning why we even bother criminalizing people with questionable immigration status, because what does it even achieve?”9

Data on the precise number of trafficking survivors being held in detention around the world isn’t always readily available. In fact, the U.K. government denied holding records of this data until freedom of information requests10 submitted by data-collecting project, After Exploitation, found that thousands of potential and confirmed trafficking victims had been detained and held in prison-like settings in the U.K. between January 2019 and September 2020.

And this number is expected to grow. Under new changes passed through Parliament without debate, survivors recognized as ‘potential trafficking victims’ by the U.K.’s Interior Ministry will not automatically be considered too ‘at risk’ to detain.

The new guidance will expect exploited people to give further evidence of ‘future harm’, via a medical professional, before they are recognized as too vulnerable to be held in prison-like settings. Survivors are at risk of being detained on an even wider scale, and for longer under these changes.

It is unacceptable that survivors are not only being denied the support they need to recover but are also having their freedom stripped away a second time.

We were disappointed to receive a letter11 from the U.K. government refusing to issue a ban on the detention of all trafficking survivors, ignoring clear recommendations from the UN Special Rapporteur on trafficking to “[ensure] that trafficked persons are not, in any circumstances, held in immigration detention or other forms of custody”.12

That same letter said, “This Government is committed to tackling the appalling crime of modern slavery; ensuring that victims are provided with the support they need.”13 Let’s build the momentum necessary to pressure the U.K. government, and others, to stand by their explicit commitments to tackle modern slavery and support survivors.

Sign the petition today and join the global call on governments to stop detaining trafficking survivors and release all potential and confirmed survivors from detention.

the first gift we receive is LIFE, the second must be FREEDOM.

No country has the right to forcibly remove organs from any person, be they criminals or illegally detained person’s.
BUT the Chinese are know for their total disrespect for any life form be it human or animal.

Humanity deserve some respect and responsibility

I became a member of Survival International 40 years ago (Indigenous peoples) and supporter of the British Anti-slavery Society. Also, I am a strong supporter of animal welfare and conservation of species causes, as I see the suppression of vulnerable people linked strongly to the compassionate treatment of all life forms that are not disease species. Many people are of the same mind now, as we shed the shackles of the overlords of politicians, powerful companies, entrenched individuals.

The conduct of the Chinese government toward the Uyghur minority is a monstrosity, a total violation of human rights and and a crime against humanity.

Ask your MP to ditch detention for modern slavery survivors

Right now, survivors of modern slavery and trafficking are being detained in prison-like settings because of their immigration status. In the U.K., since 2019 alone, more than 2,900 potential victims were held behind bars because of immigration insecurity.

Within immigration detention, survivors are subject to serious retraumatisation, psychological distress and a continuation of their ordeal of exploitation at a time when they most need to start recovery and access help. The U.K. is the only European country with no time limit on detention, which means that survivors are locked up with no end in sight.

The seriousness of locking up potential survivors behind bars, after they have overcome all odds to be recognised by the Government, cannot be overstated.

Please will you raise this issue in Parliament? You can learn more about the impact of detention on survivors here.