Q&A: Taking the trafficking out of sex work - FreedomUnited.org
This website uses cookies to improve your experience. We'll assume you're ok with this, but you can opt-out if you wish.Accept Read More
Skip to content
Back to Global News 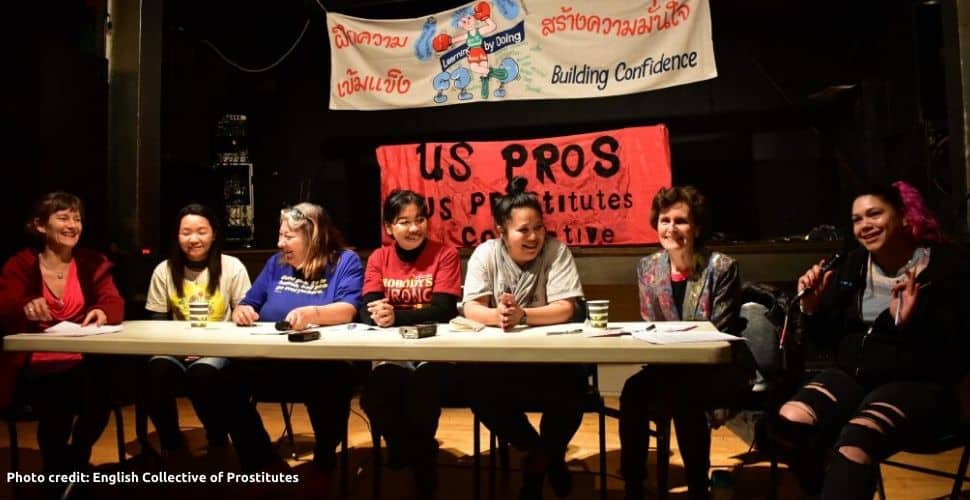 Q&A: Taking the trafficking out of sex work

Sex trafficking has long been separated from the broader crime of human trafficking. But some are beginning to question whether this separation is useful—or even whether it’s actively harmful.

Sex workers’ rights advocates argue that the division makes it easier for people to conflate all sex work with trafficking, inspiring misled campaigns to eliminate sex work at large and denying sex workers the opportunity to advocate for their labor rights. It also perpetuates victims of exploitation being treated as criminals rather than receiving the help, support and justice they deserve.

Freedom United had the privilege of holding a Q&A with Empower Foundation Thailand and the English Collective of Prostitutes to learn more about this important issue.

88% of votes on Freedom United’s Twitter poll supported the belief that sex workers and sex workers’ rights organizations are key stakeholders in fighting sex trafficking.  Do you think sex workers’ voices are being heard in this fight?

EFT: Sex workers’ organizing is central to fighting exploitation, including trafficking but our contribution has not been recognized.

What Hit and Run showed is that sex workers in Thailand are the main providers for families and communities. It showed that women want to migrate to find better-paid work than is available in their home country but are denied legal ways to travel. In cases like these, women may pay someone to help, with the expectation that they will earn money through sex work to pay off any debt incurred. Restrictions against safe independent migration should be the foundation of any discussion around trafficking.

Instead, the issue of trafficking has been used to increase police powers, close borders and mount ‘raid and rescue’ operations against sex workers, causing great harm. Crucially, the research was able to provide statistics that showed that during police raids, for every person classified as a victim of trafficking, around six to eight non- trafficked migrant sex workers are arrested, detained and deported.

Those classified as ‘victims ‘are also detained for even lengthier periods of up to two years and ultimately deported.

Labelling those of us who are migrant sex workers as automatically victims of trafficking means our role spearheading the movement against criminalization and violence in the sex industry is hidden. In addition, the solutions offered to those who are trafficked fail to uphold their human rights, dignity or respect their needs.

How do you see sex work as different from trafficking?

EFT: To answer this question we have to start by saying who sex workers are. In Thailand, 80 percent of sex workers are mothers. On average sex workers in Thailand support five to eight other adults and are aiming to end to poverty for their family generationally. Women are building big dreams; buying land, tractors and houses, setting their sisters up in small business, putting their kids through university – they are the main provider for the family.

Conflating all sex work with trafficking as commonly understood – that is the movement of people by force and coercion coupled with forced unpaid labor in the destination country, is very problematic.

The confusion between sex work and trafficking remains a barrier to effective responses and identification of trafficked persons. It also hinders efforts to tackle the real concerns sex workers have about our working conditions, as we risk that the response to workers complaints will be increased raid and rescues, not improved labour standards.

Labelling all migrant sex workers as victims of trafficking effectively makes it impossible for sex workers to take a pro-active role in addressing human trafficking in our industry. We are all at risk of arrest, detention and for the migrants among us, deportation – so we cannot be as effective as we could be.

How can sex workers and sex workers’ rights organizations be allies in stopping sex trafficking?

EFT: The term ‘sex trafficking’ is a misnomer used to further stigmatize and divide sex workers from all other workers. Allies should refute this term and consider the situation of trafficked workers into all industries. Trafficking into the sex industry is made possible because of women’s poverty and our determination to escape it. It is exacerbated by closed borders, a hostile immigration environment, sexism, racism and other discrimination in employment; and the low wages and exploitative working conditions that are allowed to exist in all jobs.

An effective anti-trafficking strategy has to strengthen women’s hands. Decriminalizing sex work would enable women who work in the sex industry to insist on the same labor rights as other workers and report violence without fear of arrest. This would end the impunity of exploitation and make women less vulnerable to those ready to exploit them.

We campaign for decriminalization and safety but also against the hostile immigration environment, and for benefits and housing so that women have access to money and resources to feed themselves and their families.

The other strategy against all exploitation and abuse in the sex industry, including trafficking, is to organize with other workers to raise wages and address exploitation.

How have your organizations been able to assist with helping sex trafficking victims and survivors in both the UK and Thailand?

ECP: Some of the women in the English Collective of Prostitutes’ network would fit the description of a trafficked victim – that is someone who is brought to the UK, held against their will and threatened or coerced to provide sexual services for somebody else’s profit.  In every case the women weren’t ‘saved’ by others, they escaped through their own ingenuity, courage and organizing skills.

Two sisters who came to London from rural Moldova, where the family had “no running water, or gas for heating”, were promised work in a restaurant. They told us how “after a week the men said we must earn our keep by sleeping with other men. They beat us and said we would never see each other again if we tried to leave.” They escaped by recruiting help from the receptionist in the flat where they worked, who squirrelled away some money. They both faked illness on the same day and ran. They refused to go to the police because they didn’t want to be sent back. They came to us instead and we found them emergency housing for a few days. Eventually, one sister got a job as a stripper so they could afford market rent.

We have at least 10 examples like that: the woman who cultivated a relationship with a bigger gangster than the one holding her, who supported her to get her passport back. The young woman who jumped out of a car at the petrol station and was sitting on our women’s center doorstep when we arrived in the morning. We helped her claim asylum and she was put in prison for travelling on false documents. It was our campaigning with Black Women’s Rape Action Project that got her out.

EFT: Empower has found that it is often women’s customers who provide the most effective and immediate assistance in their escape from situations of trafficking.

EFT: It is usually manners to check if someone is drowning before dragging them out of the water.

For the past ten years, sex workers in Thailand have had our human rights violated under the guise of implementing anti-trafficking law and policy. We have experienced an onslaught of slander vilifying our entire industry; violent police raids on our workplaces, arbitrary detention, forced rehabilitation in government shelters and deportation.

Non-trafficked migrant sex workers without immigration documents who are apprehended in ‘raid and rescue’ operations are frequently compelled to be witnesses […] Women and girls apprehended in raids are not consulted about their place of detention, have no choice about which place they go to and cannot leave once they are there. They are effectively imprisoned.

We came to build a new life for the family not to be sent home empty-handed and ashamed. If something bad happens to us we want to find a new place to work with a better boss.

Women interviewed for Hit and Run commented on how dehumanizing the term sex trafficking is:

Sadly our research went on to show that often when people discuss human trafficking into the Entertainment Industry they call it “sex trafficking” and the word ‘human’ disappears. They don’t use similar terms like sewing trafficking or fishing trafficking. The focus isn’t on our human rights after all, but rather the problem seems to be that we are having sex.

We are forced to live with the modern lie that border controls and anti-trafficking policies are for our protection. None of us believe that lie or want that kind of protection.

We have been spied on, arrested, cut off from our families, had our savings confiscated, interrogated, imprisoned and placed into the hands of the men with guns, in order for them to send us home… all in the name of “protection against trafficking”.

It’s rubbing salt into the wound that this is called helping us. We are grateful for those who are genuinely concerned with our welfare … but we ask you to listen to us and think in new ways.

After “raid or rescue” we will walk the same path again, facing the same dangers at the same border crossings. Just like the women fighting to be educated, fighting to vote, fighting to participate in politics, fighting to be independent, fighting to work, to love, to live safely… we will not stay in the cage society has made for us, we will dare to keep crossing the lines.”

What are your views on trafficking for sexual exploitation and sex work? Leave your thoughts in the comments below.