Live through us George Floyd - FreedomUnited.org
This website uses cookies to improve your experience. We'll assume you're ok with this, but you can opt-out if you wish.Accept Read More
Skip to content
Back to Global News 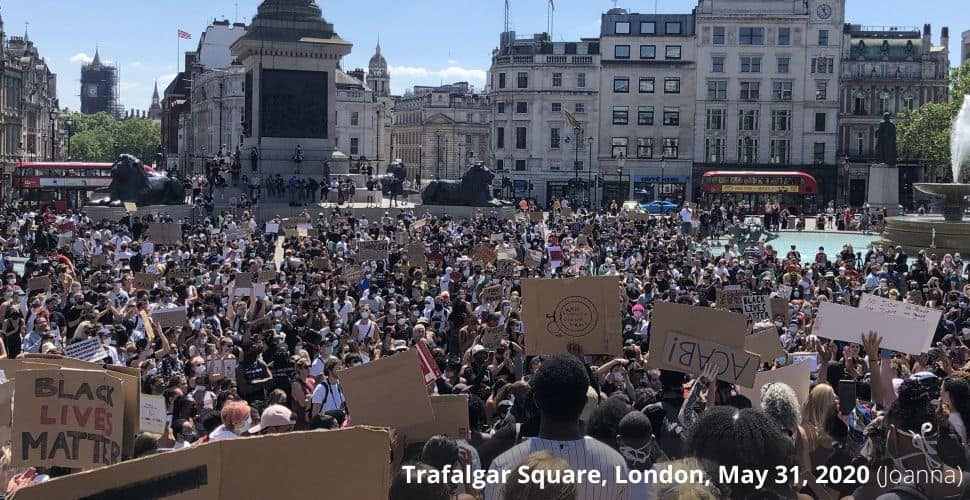 Live through us George Floyd

Our Executive Director, Joanna Ewart-James, comments on the murder of George Floyd.

The murder of George Floyd in police custody exposes a total failure in the principle of equality – that for all lives to matter Black lives must matter. His life cannot have been valued by those in the position of power whilst his breath was being taken away. The many others who have died at the hands of police in the U.S., without legitimate defense, share with George their racial identity – Black. The circumstances can only be explained by deep-seated racism – actions suggesting Black lives don’t matter.

The response, demonstrations across the US supported globally, exposes the failure of progress to end racism by peaceful means. A mass movement is rising up to challenge the status quo. Civil unrest is challenging, criminal damage should not be celebrated, and there are undoubtedly opportunists joining in. But we have to recognize that these actions follow the principle of how social change happens – through disruption.

In Bill Moyers’ highly regarded theory of a successful social movement, Moyers explains that social movements need the energy, trigged by the public recognizing that governmental policies violate widely held beliefs and values. He quotes Hannah Arendt: “people are more likely driven to action by the unveiling of hypocrisy than the prevailing conditions.”

The apparent impunity enjoyed by the police in the killing of Black people, to date, is symptomatic of systemically racist and discriminatory systems that have been tolerated and actively supported for too long.

We are yet to see whether the power holders recognize that this is a time to come out from behind their statements of equality, and change their operative policies to live those statements rather than enabling the continued degrading of lives based on skin tone.

Looking to Moyer’s theory, we could read that we are at a moment just before success – the feelings of crisis, failure and powerlessness has stimulated action to bring endemic racism to the mainstream. However, Moyers also warns of the dangers of burnout, violence, and failure to bring about mainstream support.

Freedom United supports the movement’s call for justice. We support radical change in policies, practices and behaviors that demonstrate equality in action. Black lives matter. We recognize that these same principles of discrimination, of not valuing people based on their identity, perceived or otherwise, provides a basis for society’s tolerance of exploitation and why some people live in conditions of modern slavery.

The movement’s success in framing a new widespread value of what is and is not socially acceptable, in which extrajudicial killings can no longer be swept under the carpet of racism, will help progress our fight. It will bring an end the discrimination-based slavery system we see in U.S. prison-industrial complex, as well as other forms of modern slavery as racial identity will no longer create a social license for discrimination, a well-recognized ‘vulnerability’ to modern slavery. We hope it succeeds.

Live through us George Floyd.

Please check out this list of resources to find ways you can help and donate here to support 60+ bail funds, mutual aid and activist groups across the U.S.

All lives matter. We are all one race….homo sapiens and must support those of us treated unjustly .

I can never comprehend why anyone would have so much hate in there heart to murder someone just because of their race, it baffles me. It terrifies me to think of how much worse it’s going to get before it gets better. To realize the way African Americans have been treated during slavery I feel remorse for them but in today’s time how could there be hate for no other reason than colour. I pray that there are enough anti racist people to help find a way to better our society. Violence isn’t it 💞💞

I saw a video a young black man made. He wanted to know if the elderly black man, shot to death by another black man, mattered, or is it just those who die in police custody? It’s absolutely terrible but there are thousands of more blacks are killed by blacks than whites, police officers or not. Where policy etc starts at the top, civility starts at the bottom in all cases of black or white citizens. When such civility is not present anarchy will persist, including violent crime.