Jayson's story - FreedomUnited.org
Skip to content
Back to Global News 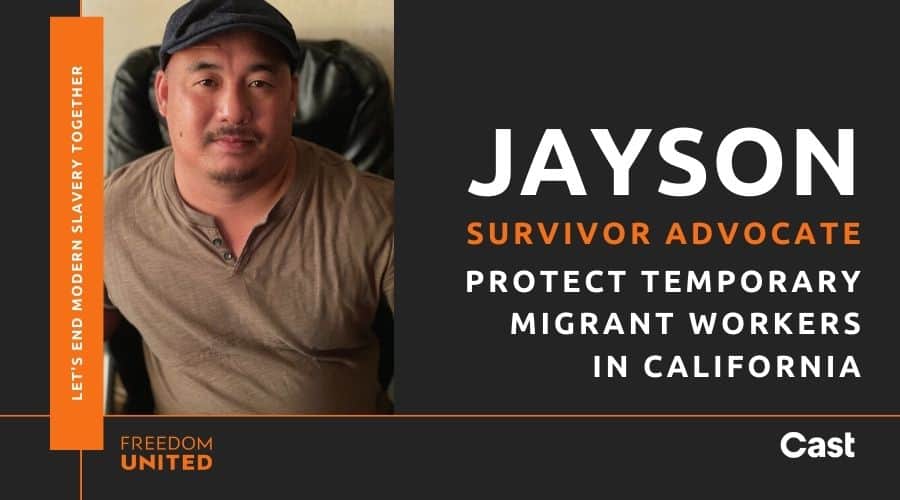 My name is Jayson.

While I was working in the construction industry in the Philippines, my uncle received a phone call from a woman asking for a guy that can work for her. My uncle recommended me and passed me the phone.

She seemed very nice and professional towards all her employees she worked within the Philippines. I already knew her since I worked at her house before, which is why I trusted her and took the offer.

After she left the Philippines, she paid a recruiter to work with me to arrange the visa. The recruiter told me what to say and do. He said that I would come to the U.S. on a P-1 visa for athletes and that it would be easy to get a legal work visa once I had arrived. I believed his lies.

When I got to the U.S., I was met by the same woman I’d been introduced to working in construction. She slowly showed her true colors and became my trafficker. I did not really speak English or understand my rights, so I did everything that my trafficker told me to do. First, she took my passport for safekeeping. Then, she said that I owed her $12,000 and that I would have to work for her for 10 years. I was only allowed to work for her and not anyone else. She said that because she had been the one who brought me to the U.S., she owned me.

I started working for her in an elderly care facility where I met Angela. Angela had been brought to the U.S. before me, so I knew that my trafficker had done this to other workers.

At first, Angela and I did not trust each other, but we soon learned that we had been told the same lies and threats by our trafficker.

At the facility, Angela and I worked 24 hours a day, seven days a week with no days off. We basically worked all day and all night. I got very little sleep since I had to sleep on the floor next to my elderly patients who had very serious illnesses. In addition to caring for the patients, I also worked in construction and gardening at the facility.

I was paid only $400 a month and my trafficker told me that the rest of my promised salary went towards paying off my debt for my visa. I was not allowed to leave the facility at night or talk with any neighbors or family members of clients.

When officials came to the facility, our trafficker made Angela and I hide from them. I was afraid all the time—she told us often that the police could arrest us. She said that if we went out and the police asked questions, she would deny that we worked for her. Since I did not have any papers, I was scared. Also, I would have no place to sleep if she did that. I was scared every day.

I worked like this for nine months. It was a horrible feeling—I felt sad and worried all the time. I thought I was stuck for 10 years, not able to go anywhere or see my family. I was trapped in a nightmare but I just kept working and working and working.

After about nine months, a neighbor noticed that Angela and I did not have any days off. She reported this to the FBI and, later, Angela spoke with them. Angela told me she thought we might get help and that someone was watching out for us.

I finally was able to leave in the middle of the night. The FBI helped me get support from a services agency that picked me up and placed me in a shelter for men.

I did not get any of this information before I came to California. I did not have a way to know this on my own—I had no way to be safe.

That’s why I’m sharing my story with Freedom United and the Coalition to Abolish Slavery and Trafficking (CAST) to help spread awareness about labor trafficking and the fraudulent practices of foreign labor recruiters who bring workers to California.

That’s why I support amending SB 477 to cover all visa categories. It would protect workers like me and Angela from becoming victims of human trafficking. I would have known what was going on before I came here and I would have gotten to decide what was right for me. I want other workers to be able to have this knowledge to protect themselves.

Join me today in urging California to ensure all its temporary workers are free from trafficking. Together, we can ensure ALL temporary migrant workers are protected so we can prevent them from being trafficked and coerced into forced labor like I was.