World Day for International Justice - FreedomUnited.org
This website uses cookies to improve your experience. We'll assume you're ok with this, but you can opt-out if you wish.Accept Read More
Skip to content
Back to Global News 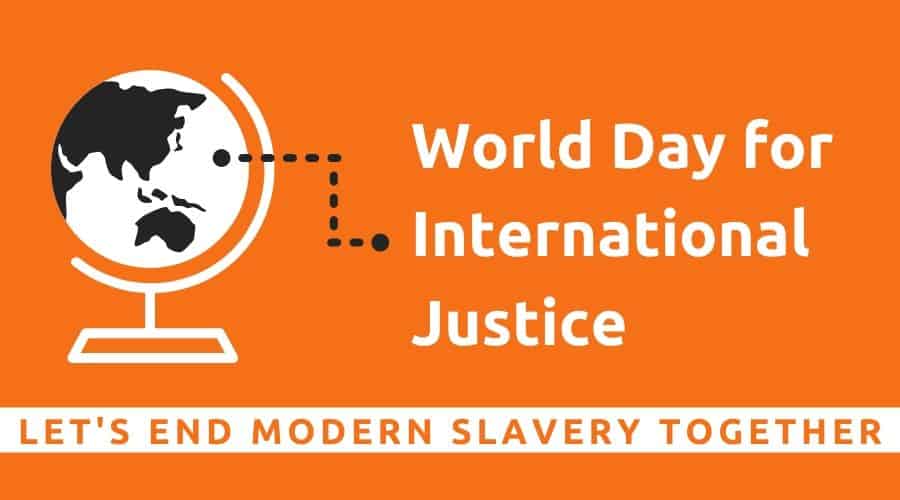 On World Day for International Justice, the Freedom United community is seeking justice for victims and survivors of all forms of modern slavery. Receiving compensation helps victims on their road to recovery and helps prevent re-victimization.

Around the world, millions of modern slavery survivors are struggling to make up for the wages stolen from them, facing a number of obstacles to compensation along the way. For example, previously in California, any crime victims seeking reimbursement for lost income were required to submit a worker’s compensation report or a letter from their employer—in a modern slavery survivor’s case, that’s the same person who exploited them.[1]

Thanks to the efforts of our partner, the Coalition to Abolish Slavery and Trafficking (CAST), California passed a new law in November 2019 that enables human trafficking survivors to receive lost income from California’s Crime Victim Compensation Fund without a letter from their trafficker. The bill, AB 629, empowers survivors with resources to rebuild their lives.

However, many victims of modern slavery around the world are still not receiving the justice they deserve.

A 2018 case study conducted in the Netherlands found that only an estimated 4% of all registered victims of human trafficking in Europe claim compensation in the criminal court. Of these claims, 20% are inadmissible. The admissible claims are on average awarded only half of the claimed amount. [2]

These shockingly low statistics come as a result of one of the main obstacles to providing compensation: the difficulty in estimating damages—including stolen wages and abuse—accurately. In many cases, a lack of records, insufficient financial investigation, and incomplete testimonies result in only minimum amounts being awarded.

Additionally, in order to access compensation through the criminal court system, perpetrators must be tracked down and victims are forced to relive their trauma through lengthy court proceedings.

Modern slavery victims and survivors deserve better protections in court in order to reclaim and rebuild their lives.

Justice for victims of modern slavery has been written into international law, including the Protocol of 2014 (P29) to the Forced Labour Convention 29 (C29)—an international commitment to ending forced labor. Nonetheless, the Protocol has yet to be ratified by many countries.

This Protocol updates the Forced Labour Convention in a way that makes sense for today, and it includes provisions to protect and compensate victims, regardless of their legal status in a country.

Under the Protocol, victims are offered protection from prosecution for crimes they may have committed as a direct result of their forced labor. They also are presented with the ability to claim compensation for the abuses they have experienced.

Honor World Day for International Justice by taking a stand and signing our petition to put justice for victims of forced labor on your country’s agenda. Add your name to our petition here.