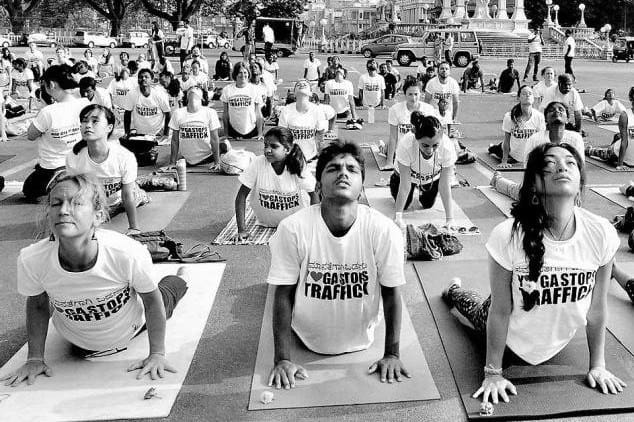 The initiative was organized by the Odanadi Seva Trust.  This was the 7th event and was held at venues in Australia, Belgium, Canada, Chile, Egypt, England, Finland, France, Israel, Germany, Indonesia, Mexico etc. Prabahamani, an activist of Odanadi, said that it was being held in Mysuru, Bengaluru and Goa.

Thousands rolled out their mats and performed yoga as they participated in Yoga Stops Traffic.  At dawn in Mysuru, for example, a crowd demonstrated for an hour at the Chamaraja Circle which is across from the palace.  That particular event included a cultural program and stage performance.

The organisers said that it was symbolic of raising their voice in unison against trafficking. R. Balasubramaniam, founder of Swami Vivekananda Youth Movement, who inaugurated the event in Mysuru, said the challenges to fight thuman trafficking was immense. “Yoga is India’s gift to the world and using it as a tool to fight human trafficking and organising it across different countries, has its own challenges,” he said.

To read the entire article about yoga events against slavery, click on the link below