Little Stability for Yazidi Women and Children after ISIS - FreedomUnited.org
This website uses cookies to improve your experience. We'll assume you're ok with this, but you can opt-out if you wish.Accept Read More
Skip to content
Back to Global News 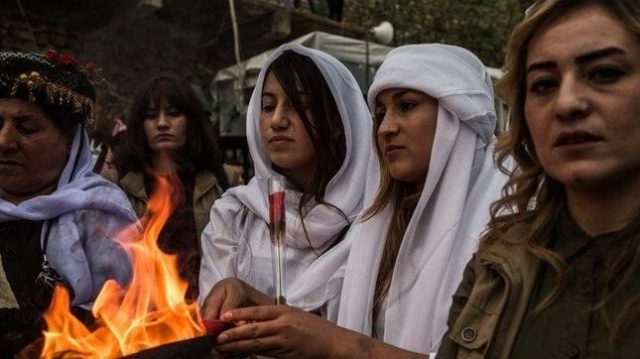 Little Stability for Yazidi Women and Children after ISIS

Iraqi fighters drove ISIS out of Mosul and many other parts of Iraq this summer, but still the persecuted religious and ethnic minority, the Yazidis, have little stability according to the New Yorker.

“The Yazidis, a long persecuted religious and ethnic minority who practice a faith with pre-Zoroastrian roots and Islamic and Christian influences, stability is still a distant prospect. ISIS militants consider the Yazidis infidels and have subjected them to systematic killings, rape, and pillage. In the summer of 2014, ISIS killed hundreds, possibly thousands, of Yazidis; more than fifty thousand survivors fled to Sinjar Mountain, in the baking August heat. Three thousand Yazidis remain in ISIS captivity, but as ISIS has lost territory, international interest in them has faded.”

Leila is an example.  At  twenty-three, she was captured and taken as a slave by ISIS in Sinjar. Along with other Yazidi women, she was then moved to Raqqa, Syria. Again Leila was moved and sold to a Sunni Arab farmer. He had at one time been like a godparent to Leila. She was hopeful that he would save her, but instead, he sold her to an ISIS commander who kept her captive for  a year, raped,  and tortured her.

Most of the Yazidis are displaced in camps and temporary shelters in northern Iraq.