Yazidi Activist Wins Nobel Peace Prize - FreedomUnited.org
This website uses cookies to improve your experience. We'll assume you're ok with this, but you can opt-out if you wish.Accept Read More
Skip to content
Back to Global News 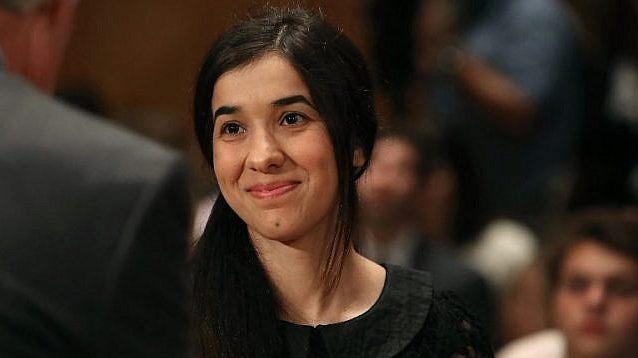 Nadia Murad, a Yazidi activist who was forced into sexual slavery by ISIS, has been awarded the Nobel Peace Prize for her efforts to campaign against rape as a mass weapon of war.

She becomes the second youngest winner of the Nobel Peace Prize after Malala Yousafzai.

The 25-year-old survivor has become the face and voice for Yazidi women who were bought and sold at the hands of ISIS, often facing extreme sexual violence.

Murad was abducted along with thousands of other women and girls in 2014 when Islamic State overtook her homeland northern Iraq. As members of the Yazidi ethnic minority, the women were singled out for rape by ISIS fighters.

Unlike other women who escaped and who wish to remain anonymous, Murad has spoken out publicly about the abuses and insisted on showing her face. Her advocacy efforts even convinced the US State Department to recognize the genocide of the Yazidis.

Born and raised in the village of Kojo in northern Iraq, Ms. Murad, along with her family, was at the center of ISIS’ campaign of ethnic cleansing. Kojo, on the southern flank of Mount Sinjar, was one of the first Yazidi villages to be overrun by ISIS, which launched its attack from the south on Aug. 3, 2014.

Residents were herded into Kojo’s only school, where women and girls were separated from the men. The male captives, including six of Ms. Murad’s brothers, were loaded into trucks, driven to a field outside the town and executed.

The women and girls were forced into buses. Ms. Murad was taken to a slave market, where she was sold to an ISIS judge. While the wives of ISIS members were ordered to wear full-covering face veils and gloves, Ms. Murad was forced to wear makeup and suggestive dresses with spaghetti straps.

At night, the militant forced himself upon her, viciously beating her if she dared to close her eyes during the assault, she recounted. He warned her that even worse things would happen if she tried to escape. When he caught her jumping out of a window, he ordered her to undress. Then he sent in his bodyguards, who took turns raping her until she passed out.

Murad eventually managed to escape her captors, and for years afterwards refused to wear makeup. She has since spoken out about the treatment of Yazidis in front of the United Nations Security Council, the United States House of Representatives, the House of Commons in Britain, and other global bodies.

Back in Iraq, Murad has become an icon, with many carrying a picture of her on their phones. Her face even adorns posters put up on telephone poles.

Murad noted that she is exhausted by having to repeatedly tell her story and speak out against the abuses, but says she continues because other Yazidi women are still being victimized back in her homeland.

“I will go back to my life when women in captivity go back to their lives, when my community has a place, when I see people accountable for their crimes,” she said.

If you sincerely want to create “greatness”, this is where you start. Nadia Murad is worth a thousand Donald Trumps.

God bless you and smile upon your efforts!! 🙂

what a wonderful couragous lady

America needs to speak up against rape and violence .