Freedom United joins Uyghur rights groups & allies in Week Of Action against Zara - FreedomUnited.org
This website uses cookies to improve your experience. We'll assume you're ok with this, but you can opt-out if you wish.Accept Read More
Skip to content
Back to Global News 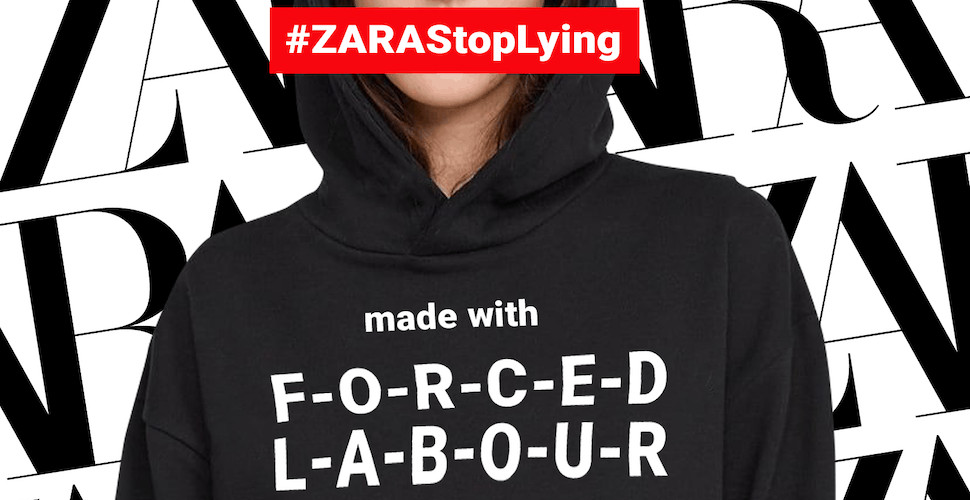 This week, Uyghur rights and advocacy groups will stage virtual demonstrations during the holiday sale season to highlight that Zara, its parent company Inditex, and the global fashion industry profit from Uyghur forced labour.

In early November, the Business, Energy and Industrial Strategy Committee of the UK Parliament held a hearing to determine “the extent to which businesses in the UK are exploiting the forced labor of Uyghurs.” In its testimony, Inditex adamantly denied ties with Huafu Fashion, which owns and operates several factories with forced labor allegations, including Huafu Melange Yarn Co., Ltd.

A Wall Street Journal story recently revealed that five auditing companies have essentially blacklisted the Uyghur Region due to government restrictions and the climate of terror, which prevents workers from speaking freely to auditors without risking retaliation.

This means that companies can no longer point to auditing reports to justify sourcing from the Uyghur Region.

Supporters can join the week through these following actions:

Tuesday December 1: Tell Zara to stop profiting from Uyghur forced labour by adding your name to Freedom United’s petition and write to Zara through Freedom United and CSW.

Thursday December 3: Tell the U.S. government to hold Zara accountable by texting “UYGHUR” to 50409 or sending a message to your Senator via Jewish World. Tell members of the European Parliament to vote for a strong due diligence legislation amplifying the calls for strong legislation and the Uyghur forced labour situation to the EU Commission and DG Justice.

Friday December 4: Call out Zara on social media by flooding @Zara’s latest Instagram posts with comments and a Twitter storm directed towards @Zara.

Supporters can also share the infographic from @FreeUyghurNow on social media with the hashtag #ForcedLabourFashion. The ad parodying Zara was created by Uyghur artist Yette.Su.

“Zara was once my favorite fashion brand, perfectly tailored for young women like me who felt like they could express themselves through its unique style. But putting these clothes on now feels too heavy a weight on my shoulders, knowing that the fabric on my body was tailored with the tears and involuntary labor of my own people,” said Zeynep Aydin, Uyghur Student at Free Uyghur Now.

“During this holiday sale season, global consumers should question how our clothes are so cheap. The true cost lies in the exploitation of whole swaths of people, including from the Uyghur Region, whose labor is coerced  to produce very cheap cotton and garments. Global businesses— like Inditex— should not operate like this. Freedom United is joined by over 55,000 people and thousands more each day calling for their freedom,” said Joanna Ewart-James, Executive Director at Freedom United.

“Zara told a bold-faced lie to cover up their ties to Huafu Fashion, so that it can continue to profit off the forced labour of the Uyghur people. Consumers must send a powerful message to Zara and Inditex, as well as other apparel retailers and corporations selling goods partially or wholly made in the Uyghur Region. Our global consumption should no longer tolerate the wholesale oppression of people,” said Johnson Yeung, campaigner at Clean Clothes Campaign.

The Chinese government has rounded up a recorded estimate of 1-to-3 million Uyghurs and other Turkic and Muslim people in detention and forced-labour camps, the largest interment of an ethnic and religious minority since World War II.

Abuses include sterilization, violence, forced labor and imprisonment of Uyghur and other Turkic peoples.

A central element of the government’s strategy to dominate the Uyghur people is a vast system of forced labour, affecting factories and farms across the region and China, both inside and beyond the internment camps.

The groups issued a call to action for apparel brands to stop sourcing from the Uyghur Region and cut ties with suppliers with known ties to forced labour, from cotton to finished garments, within twelve months.

Earlier this fall, US and UK-based human rights, labor and investor organizations filed a formal petition with U.S. Customs and Border Patrol (CBP), urging it to issue a regional withhold release order (WRO) on all cotton-made goods linked to the Xinjiang region of China based on evidence of widespread forced labor.

Under U.S. law 19 U.S.C. §1307 it is illegal for the United States to allow entry of goods, “produced, or manufactured wholly or in part in any foreign country by convict labor or/and forced labor or/and indentured labor.” CBP is weighing a ban on cotton productions from Xinjiang in response to the petition.

Several weeks later, the U.S. House of Representatives overwhelmingly passed the Uyghur Forced Labor Prevention Act (H.R. 6210). The bill is designed to end the use of Uyghur forced labor in corporate supply chains by banning all imports with content from the Xinjiang Uyghur Autonomous Region (otherwise known as the Uyghur Region) — unless the brand importing the product can prove it was not made with forced labour.

As reported, the Coalition to End Uyghur Forced Labour is seeking the following commitments from brands and retailers: