Uzbekistan's Future Hinges on Freedom of Association - FreedomUnited.org
This website uses cookies to improve your experience. We'll assume you're ok with this, but you can opt-out if you wish.Accept Read More
Skip to content
Back to Global News 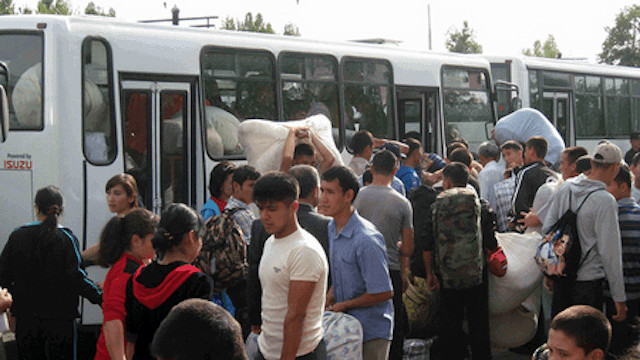 Students and state employees being sent to the cotton fields in 2010. Photo credit: Open Democracy

Uzbekistan has embarked on major reforms and increased diplomatic engagement since Shavkat Mirziyoyev took over as president.

Yet, issues remain. There are still no independent media, exiled Uzbeks have no guarantee of their safety if they return, bloggers are persecuted, and forced labor persists in the country’s cotton harvest.

As Kirill Buketov works for the International Union of Food and Allied Workers Associations argues, “Before we start declaring a “new Uzbekistan” and calling for an end to the boycott of Uzbek goods, we need to take a critical look at how deep the reforms go in a country where civil society has been viciously repressed and fundamental rights and freedoms, including freedom of speech, assembly and trade unions, banned.”

In an opinion piece for Open Democracy, Buketov says any improvement in labor rights hinges on worker mobilization:

About a year has passed since that autumn night when a sudden order was given to return all students to the classroom from the cotton fields. The confused and drowsy students (and their equally confused tutors) were roused from their mattresses and pushed into emergency transport to be returned to their homes.

The order was given at night because it came from another hemisphere – from Washington, where it was still daylight and President Shavkat Mirziyoyev was in negotiations with the World Bank.

The stakes were high: the World Bank doesn’t offer a billion dollars to just any old country. The offer came, of course, with strict conditions attached, including massive reform, starting with a ban on slave labour in the cotton fields.

If global public pressure remains firm, Uzbekistan’s new direction will still require liberalisation of legislation and law enforcement practice. In 2016, under pressure from an international campaign to root out child and forced labour in the country’s cotton production, Uzbekistan ratified the International Labour Organisation’s (ILO) convention on freedom of association and the right to unite in trade unions.

This convention allows workers to create their own organisations, independent of governments and employers, for the collective protection of their labour rights.

With ratification of the ILO convention, Uzbekistan’s workers finally have the chance to create trade unions and push for collective change.

As Buketov writes, the readiness of the working class to unite will determine their future.

“If workers can unite, they can ensure that no one has the power to send millions of people from the cities to the cotton fields and back on a whim, or imprison those who dare to demand better wages and working conditions and assert their human dignity.”